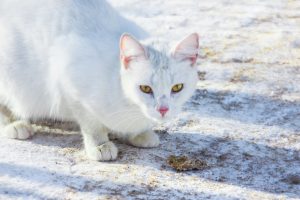 Wondering why cats eat bugs – and whether or not it’s safe?

If you’ve encountered your cat eating bugs, you’re far from alone. This common cat behavior leaves many pet owners wondering just what is going on with their cat.

There’s no need to stress – in this post, we’ll go over the reasons why your cat wants to eat bugs, and how to keep them safe no matter what they try to catch. Keep reading to learn more!

Cats love to hunt. However, most domesticated cats rarely experience situations in which they get to catch their prey – especially if they’re indoor cats. That’s why these instincts are often turned to the next best thing: insects.

Many cat toys exist to mimic the hunt. However, some cats find that nothing is better than the thrill of the chase – even if they’re chasing a fly instead of a bird or rodent.

Cats are true or “obligate” carnivores, meaning they need animal protein in order to survive. Bugs in small amounts can’t provide a significant source of protein, though. Bugs might sometimes be a useful supplement to the diet of a feral cat. However, your pet cat isn’t looking for dietary supplements; they’re just fulfilling a completely natural need to hunt.

They’re hardwired to catch small creatures, and to play with or eat their prey.

When cats eat bugs, a few problems can occur. Luckily, most of those problems are minor.

Most common household insects won’t cause any harm at all. However, if your cat decides to eat a lot of bugs at once, they might have an upset stomach afterwards, especially if they’re eating bugs like beetles that have exoskeletons.

Occasionally, a piece of the exoskeleton can get caught in a cat’s throat, making them cough or even choke – but this is rare with small, common insects.

Most cats are good at knowing what’s poisonous and what isn’t. However, if your cat does ingest a poisonous bug, they can have serious issues afterwards. The poison might cause intestinal issues. Or the bug can bite before it’s eaten, causing external problems.

If you’re not sure whether or not a bug is safe for your cat to eat, try to catch one and have a professional look at it (such as a local exterminator). Even better, you can find out about bugs from the comfort of your own home with a useful site like this one here!

Symptoms to Watch For

Keep an eye out to be sure your cat doesn’t choke, especially if they are coughing after eating a bug. If this turns into a coughing fit, or they are having trouble breathing, go to the emergency vet immediately. This could be the result of a blockage or a serious allergic reaction.

Every day, check your cat’s skin for bumps or other signs of a bug bite. Keep an eye on anything unusual that you find, and ask your vet if you have concerns.

If you’re trying to get rid of bugs in your home, be sure you’re doing so in a way that’s not harmful to your cat. Many bait traps can be deadly to cats.

Bait traps attract large bugs, such as roaches. The insect enters the trap, eats some poison, and takes it back to the rest of the colony.

Most cats won’t be able to get into the bait trap itself, but they will be able to get any poison an insect leaves outside the trap. They can also eat the poisoned insect, and become very sick.

Similarly, foggers, insect spray, outdoor pesticides, and any other toxin used to get rid of bugs can poison your cat. Ask your veterinarian for recommendations of bug repellants that aren’t toxic to cats.

Most cats eat bugs without problems, as long as no toxic pesticides are involved. However, there are a few kinds of insects that your cat should never eat – let’s take a closer look.

Depending on where you live, most of the spiders your cat hunts are probably harmless. However, a number of poisonous species can pose a threat.

Any spider that can hurt you can also hurt your cat. In fact, since cats are smaller than humans, the venom can do even more damage to them.

Typically, if the spider is eaten, the stomach acids will be able to neutralize the venom. However, reactions to bites are a bigger threat.

Make sure to keep your cat from black widow spiders and related widow spiders, as well as the brown recluse, hobo, and whitetail spiders. Some spider bites are poisonous, while other bites cause localized wounds that can become serious.

Obviously, stinging insects aren’t an ideal choice for a snack. Just like humans, cats can have allergic reactions to stings that can have serious consequences. However, this is rare. A more common issue is a cat licking the site of a sting so much that it becomes irritated.

Occasionally, caterpillars and the butterflies and moths they turn into can be toxic. Most of the time, they’re not harmful at all, and offer your cat the thrill of the chase. However, certain caterpillars sting, which can be painful if not a major threat.

A more serious concern is the use of mothballs, which can definitely be toxic. Mothballs contain concentrated amounts of pesticides, so just one can be deadly. Instead, try using cedar to keep moths away.

Most house centipedes don’t harm cats. But larger ones can have venomous bites that can hurt your feline friends. There are also a couple of deadly, poisonous centipedes, but luckily they almost never enter homes.

You might find your cat’s love of bug snacks gross, but most of the time, it’s perfectly fine and even beneficial to let cats eat bugs.

Familiarize yourself with any toxic insects in your area, and keep your cat away from them. Avoid using toxic pesticides where your cat can reach them. Other than that, let your cat hunt to its heart’s content.

Hoping to distract your cat from hunting bugs? Check out some toys they’re sure to love here.