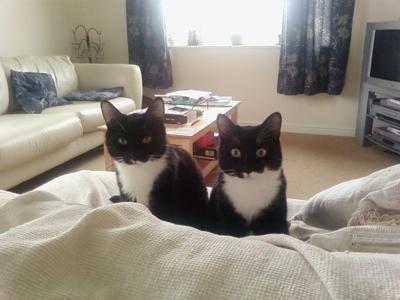 About cat food allergies. I have two wonderful cats, brothers Archie & Monte who are now 5, they are black & white ‘tuxedo cats’ and both have their own fantastic personalities. Until i moved to my existing home 3 years ago, both were healthy & happy cats. Archie however soon after the move, developed some sort of dermatitis and became very agitated. As I had decided they would be ‘house cats’ & after my previously insured out door cat lived for 20 years without me ever making an insurance claim, i foolishly decided i could not afford the health insurance as it was too expensive to pay for health insurance for them both to never need to claim, and what harm could come of them safe in my house each day.After many, many vet visits to ascertain why Archie was developing a swollen lip along with swollen joints & self inflicted injuries from him biting/chewing all his four feet, including X rays to check for injuries, skin scraps & blood checks, we were no further forward in understanding what was wrong other than the vet believing that some sort of Cat food allergies was responsible.

We tried several allergy foods including Hills containing only Chicken & Rice for 8 weeks in case it was a wheat or diary problem, which did not alleviate the problem one bit. I stopped buying flowers & having a Christmas tree after a couple of very serious outbreaks coincided with such purchases & stopped allowing the cats trips outside for the same reason.

After 2 years my vet bill exceeded £1500 and Archie seemed very unhappy, not only was he on daily steroid tablets but his behavior was not that of a happy healthy cat. At about this time my vet advised me of a new allergy test costing around £300 initially with a further annual cost of a similar amount if a monthly ‘antidote’ was required. I simply felt i couldn’t afford this further cost and didn’t want to spend any more time & money to no avail. So for almost a year a carried on trying to eliminate different things & taking several trips to the vets & subjecting my cat to regular steroid tablets. No doubt spending the cost of the proposed tests along the way. Anyway, 4 months ago i had an important family holiday planned which would mean i would have to leave Archie at the cattery for nearly 3 weeks and the thought of this worried me sick as i knew from past experience i was the only one he would allow to handle him to give him his medication & this was very distressing for him even when i administered it.

So despite the cost i got out my plastic out & took him in for the ‘new’ allergy tests. Within 7 days i received comprehensive results showing that Archie was servery allergic to all red meats – his favorite! & had a severe intolerance’s to wheat, corn, rice & diary. It also revealed that he had no allergies to anything like dust or pollen so as everything was controllable, he wouldn’t need expensive monthly medication.The end result is that several months later, Archie is not 100%, its been a struggle to find what he can eat & combine this with an interesting diet for him. Obviously the allergy tests didn’t cover all foods and it was suggested i try him on alternative carbohydrates such as Tapioca, potato & Quinta but he is allergic to all these unfortunately. The good news is he can eat peas & carrots, so he gets these varied with chicken, pork & turkey.

A very simple diet but he looks so much happier, he doesn’t have tablets forced down his neck daily and doesn’t have the stress of having to go to the vets weekly. Having two cats, matters are made worse by the fact Monty will only eat prepared cat food. Why a cat turns his nose up at freshly cooked chicken I’ll never know! so every now & again Archie manages to steal Monty’s cat food & his cat food allergies flare up bigger & worse than before so obviously he’s never gonna be cured. I suppose the point of my story is to say, firstly get the pet health insurance, if you say you cant afford it, you probably need it more than everyone else and if i had paid for it, i’d have saved in the long run as the tests would have been covered under my policy & secondly, listen to the experts, i wish i had done the tests when first recommended as i paid several fold in the end, but more importantly, it would have improved Archie’s life sooner.If you have cats with Cat food allergies, please persevere, its worth it in the end, once you find the problem(s)Well what a relief,

Boring cat foods good for health by: Not the Momma Some cats eat almost everything and some are very picky. Just like people I suppose. I think for some reason felines are known to love “fish”. It can be their natural source of survival but land based prey would be more common. Regardless all living beings cats included have nutritional needs.Some would say commercial cat food is used on a wide scale which is available in dry or wet form. Most commercial cat foods are fortified with supplemental nutrients. Some manufacturers also sell frozen raw diets and premix products to cater to owners who feed raw foods. Cats with sensitive stomachs or allergies should stay on the stuff that agrees with them even if it seems boring to us humans to eat the same things all the time. Just my opinion.

I am in the same boat by: Audrey Sandi has the same problem. She will not eathomemade cat food. Only wants dry food and I just don’t know what to give her. The allergist advised me to give her turkey and yams. I have a grill and thought I would try to make the kibbles on the grill. She is a siamese and we live in Vancouver Canada. She started this when she was two years old. I have tried all these shots from the vet and have large bills. Your cats are beautiful!

Cat allergies by: Shelly Thank goodness your story had a happy ending. Your cats are so cute! And also thank you for the last paragraph. A lot of good lessons to be learned for other cat owners. My cat Baby girl is allergic to the red die they put in a lot of cat foods. This took some time to uncover. But she would vomit after eating any red colored cat food. Took many clean-ups before we figured that one out.Again thanks for your story!