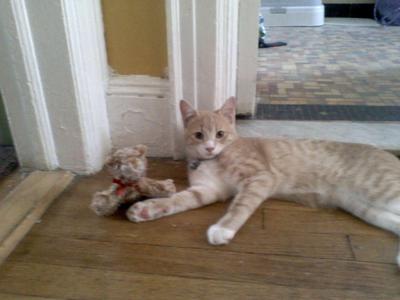 Potato with his baby

My cat is a year and a half. He is a rescue that I adopted when he was 4 weeks old. I bottle fed him and he is a beautiful, healthy cat. He has always been such a sweet boy. Calm, loving, and playful. I sometimes give him cold, filtered water out of a Dixie cup and he loves it so much. We play bubbles. He learned that when I say the word bubble, he comes running and ready to bust them. I say give me kisses and (sometimes) he licks me on my face. He loves everyone in the family (there are 6 of us, including my Yorkie who is 17 and another cat, Neo who is older than Potato). Everyone gets along, pets & people. Last Thursday I went out in the afternoon, like I often do and was gone for about 2 hours. When I came back Potato was not the same cat. He looked scared of everything. He keeps looking around like if he has seen a ghost. He will not go in my bedroom (where his food and liter box is and where he sleeps). He sits in the living room, on the coffee table and looks around. I tried waiting for him to be hungry to go into the bedroom to eat but he didn’t so I brought him the food and he ate it with vigor. He still takes snacks from me but not in the usual way. I used to shake the bag and he’d come running. Now I have to put them by him. When I call out “Bubble!”, he just looks at me. I carry him into the bedroom and he stays on my bed starring, never laying down. Then he jumps off the bed and back into the living room. Nothing is different. Everything is normal and the same. NO different liter, food, new people, no loud noises (even though nothing ever scared him before). I am so worried I can not sleep. I have been resting on the sofa near him. It is now 3 days and he is still acting so scared I don’t know how to help him.

Darlene: I most certainly feel your pain. We love our furry friends and when there not right we’re not right either. I think patience and understanding are the only things us humans can do sometimes? It sounds like something traumatic happened when you where away (just guessing). When it comes to mental trauma heeling time can be painfully long.Example: Our boy cat Thomas had to have all of his teeth pulled. The pain and trauma changed him drastically. He went from a loving and trusting cat to one that hid under the bed all the time. We thought he would never be the same. We actually gave up hope. After more then a year he started to return to normal. He still has relapses of mistrust but after about 2 years he is almost his old self. Although this story probably didn’t help much I thought it was relevant? I wish Potato cat a speedy recovery ~ Mark

Comments for What Happened to Potato Cat?

Thank you! by: Darlene Dear Mark, Thank you again for your quick response. I will get Potato to the Vet and explain everything. I will update you as I go! All your help is extremely appreciated! Darlene

New Potato Cat Problem by: Anonymous Hi Darlene: I can only speak in general terms about this going outside the litter box issue. In most cases this problem is either mental or physical. So yes a trip to the Vet should be done first and don’t forget to tell him about the water consumption. This can be a sign of medical problems plus Cat bladder and urinary tract issues are not uncommon.On the mental side going outside of the box is sometimes attributed to marking behavior or confidence issues. As in marking a spot that belongs to Potato. Or worried about competition from other pets in the home. Your vet should be able to help figure out whats going on by the process of elimination. Good luck and I hope it was just a 1 time thing. ~ Mark

A New Problem with Potato by: Darlene As Potato is getting better every day and starting to be his old self, for some strange reason, he peed on my 1 year old ($1,500) sofa. The cushion was wet and so was the back of the cushions and underneath the cushion. I know it was not Pebbles (my 10 yr old Yorkie) because he cannot climb or jump up and is never on the furniture. My sons cat, Neo, does not lay on the sofa, nor does he come to my apartment that often. Do you suppose Potato has an infection or is it because he drinks a lot of water? I thought it was cute when I taught him how to drink out of a dixie cup. He often wants his water that way now and I indulge him. Maybe he is drinking too much by doing that. Other than that, he is not showing any signs of being ill except for the strange behavior I wrote about previously. Do you think he should see a vet? What would make him pee on my couch? His liter box is in the bedroom and his food and water are no where near it. Thanks for any suggestions you may have!

Potato Update by: Anonymous Dear Mark, Just a quick update about Potato!I am happy to report that I have seen improvements in Potato in the last 2 days. He is playing a little bit more. He even popped a few bubbles and played with some ribbons. He is eating but not as much as before. I have to say hearing from you was a pleasant surprise and it actually calmed me down after reading your advice. I think by me calming down, it also helped Potato too. I look forward to my baby getting back to normal. I just want him to be happy.Thanks so much Mark. Sincerely, Darlene

Thank You by: Darlene Dear Mark,Your kind words and quit response are very much appreciated. Potato is treading lightly everywhere he goes. I try to make things as normal and as comfortable as possible for him. I look at him and I tear up just thinking he looks so sad and scared. I did some research on Google and found something that sounds so much like what he is going through. It is called Feline Hyperesthesia Syndrome. The symptoms include:Frenetic self-directed grooming directed along the flank or tail (possibly leading to hair loss)•Tail swishing,large pupils/strange look to the eyes •Skin rippling/rolling (this disorder is sometimes referred to as “Rolling Skin Disease.”)•Apparent hallucinations – seemingly following the movement of things that are not there or running away from some unseen adversary.•Vocalization, crying, loud meowing•Exquisite sensitivity to touch (“hyperesthesia”) along the spine – stroking can precipitate a bout of the behavior.There are more symptoms for this but I just put what Potato has. I hope this helps others with the same problem.I will heed your advice and be patient. Thank you so much!