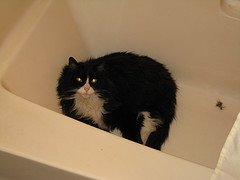 My tuxedo cat does a bunch of weird things: Plays fetch but only with black hair ties, for hours. When he sees flies, he makes a weird crackly staccato type meow and moves his mouth and whiskers really fast and stalks them. He loves to sit in the bathtub and play with the faucet and meow to it and loves it when i turn the water on a little.He lets me tie anything around his neck. He will wear scarves/bandannas/necklaces/bow ties etc for days at a time. He will sit and stare off and make a rhythmic chomping with his jaw for 15-45 seconds with his head sometimes at an angle and his eyes squinted. Like he’s chewing on nothing. Does anyone know what that is? He seems like he is in a trance when this happens. He does this all the time.

Big guy Tux by: Anonymous My 18 lb tux had a feral mom who took off early. My tux, who hasn’t a mean bone in his VERY large body, gets so happy, he leans over and nurses himself. Even more strange, he lets other cats, who are younger, “nurse” him. It annoys him but he is too sweet to hurt them, although his sheer size he sure could! He is the most loyal cat I have ever had! Very devoted and sweet. Yet still a fighter on the streets, he is missing a few chunks off his ears. You would never know he is the biggest, sweetest cat in the house. Even our mastiffs don’t bother him.

Lucy the Tux by: Anonymous I have had many cats and Lucy is my first tuxedo. We knew she was different from the start. She definitely does the blank stare as if she’s not really there any more, but staring intently enough you have to wonder what she’s thinking. She is very affectionate, loves to head-but, loves attention, but hates to be picked up and will squeak immediately if she is. In fact I have never heard her meow or make more noise than a short squeak. When picked up, her body will also go rigid and her limbs stick straight out.We sometimes call her our little soldier because she’ll march around the house, slowly and deliberately, as if she has something to conquer and yet she’ll seem frightened of just about anything, especially an unusual noise. It took her 2 years to feel confident enough to sit on my lap. She tried sitting next to me a few times with paws on my leg but that’s as far as she would get. She has also remained quite a kitten, chasing anything that moves, long after any of my other cats had lost interest.

Tux Cats Double Trouble by: Anonymous I have two Tuxedo Cats and the both do the same exact things. A have a younger one, Marley, who’s almost 3. She’s the runt so she very small and we’ve always considered her to be “extra special” because she does tend to stare into space, like if in some trance for minutes on end, especial at the spot on the wall where our light in the living room hit. But our older, Henry, who’s 14 years old and still playing like a kitten does the same thing. Marley and Henry both only like to play with small mice or something that crinkles. But the dressing they’re necks up is a huge NO NO for the both of them. If you put anything on them, even like a tissue they will drag their back legs and stomach on the floor until whatever is on them is off. They both do a very crackly squeak when intrigued by anything, not limited to bugs and other animals, but also if they want food, or you have a toy. If they want it they cry like that.But something, which I don’t know if is common for them, is they are both very loud if neglected or want to get into a room they are unable to. Henry will let out a very loud, deep, long meow over and over and Marley lets out a very high pitched cry. (which i think is adorable)

That’s Weird ? by: Anonymous This is my first tuxedo cat and she makes the clucking noise when she is stalking prey. The weird part is when a spider or fly gets above her reach, she howls until I get the broom and knock it back within her range. She will even follow me until I help.The weirdest thing she does is slide around the floor on towels when I play with her with a red lazer dot. I lay down towels and she races (even if she gets ahead)after the dot and at the last minute turns around and slides on the towel facing backwards!She is also the first feral cat I have had and I wonder if that is why she always rolls in the dirt when we go for walks. She’s on Frontline and completely tame now, she even shares an evening yogurt with me;same spoon too.Can someone tell me why she has this need to be dirty? We just moved up to the mountains.

My Tuxedo cat by: Anonymous I truly believe tuxedo cats are weird! Mine will also just sit and stare, as in a trance, sometimes staring at a wall, sometimes at nothing at all. She loves to play with small mice. She will toss it around for 10-15 minutes, sometimes hitting it back to me like volleyball, and she also loves to carry a string around. Like you said, she also loves to have things wrapped around her. We have had many cats, but this tuxedo cat has more strange behaviors then any other types. However, she is also the most affectionate and I wouldn’t trade her for anything.

not that weird for Tuxedo by: Anonymous your cat really isn’t that weird. lot’s of cats will play fetch with rubber bands and such. and I’ve had at least four or five different cats who would “chirp” at birds and bugs while stalking them. It’s also not that uncommon for cats to want to splash around in the water. as long as they don’t get their tummies wet, that is. the only odd thing about your cat is the spacing-out thing. that’s one I have not seen before. I have had a lot of cats (i guess you could call me a “crazy cat lady”) and I have never seen a cat chew on his own tongue.