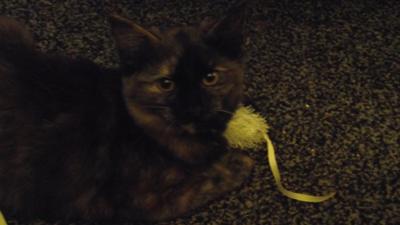 I have two cats with issues. Just thought I’d share this to see if anyone has a similar issue. I have two cats, father (a ginger tom- Bram, who’s 3 and has been fixed) and daughter (a tortoise-shell kitty- Misha, who’s just over a year old). They’re both house cats exclusively and have plenty of toys, lots of attention and things to do around the house. I work from home and therefore I’m always around for them. Both of them are very vocal, often chirping and meowing to each other and me. But Misha’s developed an odd trait that I can’t quite understand the reasoning (if any) behind it. She likes to go into the hallway where it’s dark and just meow at herself constantly for 15-30 minutes three or four times a day. There’s no chance of any pests in the walls as they’re solid concrete, and no reason I can possibly think of as to why she does this.She’s also very clingy, constantly following me around the apartment and gets into a panic when I go into another room where she can’t get to me (the cat’s aren’t allowed in the bathroom or kitchen and have always known this) but after living in such close proximity with these cats for so long we’re very comfortable with each other and know one another very well. And both cats love sitting on my lap for cuddles while watching TV on an evening. Despite their little quirks and odd personalities, I wouldn’t change them for the world. Being a mad cat lady at 25yrs old isn’t completely a bad thing.

Comments for Two cats with issues

Hallway Howling Cat by: Anonymous My cat does the same thing except he is a boy. We live in a house with a lot of extra rooms. He will go into a room we don’t really use and just start meowing. Usually once I walk into the room he stops and follows me out. It is reassuring that he is not the only cat doing this. He is kind of a broken cat, but I love him lots.

Hallway Howling by: Steph Thanks Mark!It’s comforting to know it’s not just Misha being a bit mad. Cheers for sharing your experience, all the best to you and yours. 🙂

Cats Hallway Howling by: Mark Hi Steph: I can’t say why your little Misha does the hallway meowing thing but in our family we have the same issue. Just like your family we have one boy cat and one girl both fixed and very happy indoor only cats.Our girl kitty goes into the hallway (sometimes with a toy) and howls away for a good 15 minutes usually once a night. We all eventually come running including her brother to see whats going on. After she sees us she will pause ( seems disappointed it’s us ) and then continues.My wife thinks that she is calling her kittens ( which she doesn’t have) for training. This might be a built in instinct that female cats have to communicate with the pride or offspring. In this case my girl cats pride is Us.P.s. You’re Babies are so cute!