My cat hates blankets and jackets story. Okay so my cat is really weird and if he ever sees a jacket or if you put one on he will start meowing really loudly and biting it trying to kill it. He won’t let go until you hide it from him, and while he’s biting he stomps on it too. I think he thinks its going to eat us so that’s why he tries to kill it. I was wondering why he does this. It ruins all of my jackets and I can’t stay warm. He also does the same thing with blankets, so I lose sleep if I use a blanket. But for some reason he doesn’t mind sleeping bags so I started sleeping with a sleeping bag. Why does my cat do this? He’s 21 months old and this cat hates blankets and jackets. 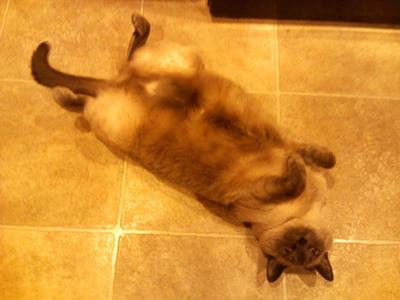 She enjoys laying in werid positions

Cat is put into boarding facility and goes insane. Another story about my kitty. We recently relocated to Alaska, and during the move there was a point in time when me and my mother were transient, we didn’t have a house to move our belongings into and we were living out of a hotel room that didn’t allow pets, so we had to leave my kitty in the car. She was well taken care of, but she scratched up my mom’s ceiling, of all things. So we put her into a large dog wire cage to prevent this. After a few weeks I decided she wasn’t happy, because I couldn’t take her out to sleep with me or outside for a walk (in Alaska, small fat critters such as my cat are quickly devoured by foxes and such) She always did her lonely meow when she saw me. And she only did it when she had missed me and really wanted my attention. So my mother decided to board her in the nearest city 2 hours away. At first my cat was ok with it, but i got a call from the boarding facility about 6 days later.Hello? hey, is this Princess’s owner? Yes OMG IS SHE OK? well yes, medically she’s ok….Oh well what is this about. Well shes acting very odd.. (at this point i can hear a cat RRROWWRRRing in the background) she wont eat, and we cant change her litter box or get in there to clean her, and shes attacked everyone, we even tempted her with the yummy cat food. We had to evacuate the cat room because her yowling was upsetting the others. Yowling? is that her in the background? errr, yes, is it at all possible you could come pick her up?So me and my mother went to go pick up my cat. when we got there, we could hear her screaming in the back, and on her cage was a sign “careful, i bite and lunge through bars” Her eyes were RED and her ears were flat back I called her name in a special tone of voice she recognizes me by and she still yowled at me for the first couple of times until she realized it was me. I started crying in fear that my cat had gone feral. she recognized me and her ears popped up and she mewed at me happily, the boarding facility lady went to open the cage to get my cat, but my cat flipped straight back to demon cat and lunged to get the lady, my cat was out for blood, so instead i opened the cage and after a heart touching reunion, I packed her in the cage to protect the boarding ladies. apparently my cat had scratched and bitten them all viciously, and I only hope none of those nice ladies got any scars.

Cat looks up then bolts 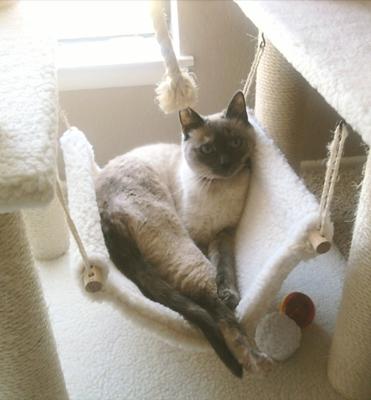 A question about a pregnant cat and some bizarre behavior: I have two cats, one male (neutered) and one female (pregnant currently). We have had our male for 2 years, and she came to our house about 1 month ago, already pregnant. They have been kept separated, although have been outside (supervised heavily) in the same space. Although they leave each other alone.But now she suddenly started being EXTREMELY aggressive towards him. Whenever she sees him, she howls and hisses, and he’s not doing anything to her. She will charge after him, even though he’s inside and she’s outside. And this happened suddenly, without any provocation. He doesn’t respond to her aggression.Could this be because she’s pregnant?Cindy’s two cents: A mother to be cat can have built up maternal aggression. It would seem your male cat is making himself a target. But this is also a chance for the mommy cat to release it. This kind of behavior usually becomes less of an issue as the kittens become old enough to fend for themselves. In the meantime it would probably be best to keep the 2 cats apart and provide a low stress environment for the expectant mother. Being an expectant mother in a scary world is probably as much as your kitty can handle right now. I would also try to keep visitors to a minimum, and avoid approaching or handling either the mother or her kittens after they are born. Just my two cents after handling the pregnancy and birth of several kittens.