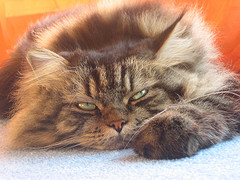 Seeking explanation for sudden cat aggression. I have two Maine Coons who are half-siblings, the elder one male and the younger one female. They have lived together with my family for two years, and yesterday, very suddenly, a strange dynamic started between the two.Our cats are indoor cats. However, they have some access to the great outdoors via our second story deck. Our older male Maine Coon has fallen off the deck a few times over the years, without any injury. Yesterday, I came home and couldn’t find our older male in the house. I called for him outside to see if he had had his approximately annual fall off the deck and sure enough he showed up.This is where the issue comes: our younger female Maine Coon, ever since I brought her brother back inside, has been very aggressive toward him. Now, whenever He is in the area, She looks at him tentatively, slowly approaches him, sniffs him, then promptly growls/hisses/swats before running away and basically hiding somewhere. I had never seen anything of this kind from Her before the older brother was brought back inside yesterday. And He clearly is as confused by the whole thing as I am. After his sister’s outbursts, he always looks around the room, alarmed, as if expecting to see an intruder of some sort who is causing his sister’s behavior.A couple of other weird things: after getting angry/scared, She sometimes lashes out at me or other family members, something we also have never seen before. And, to top it all off, our female Calico who is older than the two Maine Coons, is having no reaction at all. She treats our male Maine Coon just as she always has.In short, I have no idea what is going on and I’m writing this up in the hope that someone might have even the slightest hypothesis.

Sudden Cat Aggression by: Cam I have a 5 year old Maine Coon male and a 5 year old short hair calico female, both neutered both indoor cats. If I forget though and go out without shutting the door and get caught up in a conversation with a neighbor, the male will step out onto the porch. If he is out for a minute or two, the female spits, snarls and claws him when he comes back in. The longer he is out the longer it takes for the strange smells he carries to disappear and for her to calm down. Once he was out for up to an hour and it took her 4 days to accept him back. I think it is the strange smells that the female (in our case) cannot understand and it makes him a foreigner to her.