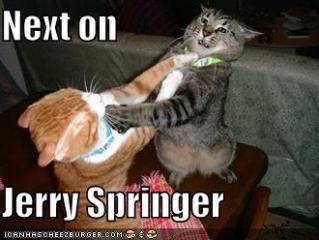 I have a problem with some spring crazy cats? I have 3 cats in all and the ages are 11, 6, and 3 years old respectively. One male who happens to be the oldest of the bunch, and then two females. All of the kitty cats are fixed and very happy indoor only furry children. The only major changes that we have all gone through was an unsettling sudden move to a new home. Yes it was upsetting for all of us but this move was over a year ago and things seem to get back to normal within a few months. Things have been very stable since the move and I can say with confidence that nothing has changed recently except the season. We are now nearing the official change to spring and all hell is braking loose around here. All of the sudden the six year old female wants to kill the 11 year old male. They must remain out of eyesight from each other. I have no idea what changed between them but I can not take waking up at 4am to cats screaming at each other. It is always around this time that the female seeks out the male to start trouble with him.The male seems to be trying to mind his own business but is forced into a situation of having to protect himself from the attacking girl cat. They both make lots of noise and posturing before it actually comes to blows. It almost always leads into a full fledged brawl as neither cat will back down. Does anybody have any clue if this might pass as summer approaches? Or have any ideas on a solution? They don’t like forced isolation or being kept apart with closed doors and they don’t like seeing one an other. It’s weird to me that we lived in peace all these years and now all of the sudden there is a problem?

Same crazy cat problem by: nikkilee93 I had three fixed indoor male cats. The middle one tolerated the other two but didn’t really like them. We all lived in peace and harmony for about two years until one night I woke up at 4am to a horrible screeching sound. The middle one was sitting on top of the 2 year old biting down on his throat. I yelled at him to get off and they both went flying out of my bedroom. Well little did I know that this would become a 4am ritual. At first it really scared me. I was so afraid they were going to kill each-other, but after a while I realized they weren’t fighting they were playing. Every morning at 4 they would chase each-other through the house and end up in my bedroom in the same spot every night and take turns sitting on top of each other pinning each other down by the neck. Yes they growled and howled and hissed but they weren’t hurting each other. It was almost like they were wrestling to see who was going to be king for the day because once they stopped there was no fighting for the rest on the day. In fact they usually would fall asleep together, but once 4am rolled around watch out. I use to get angry at them for waking me up every morning like clockwork but the 2 year old died when he was only 3 1/2 due to liver failure and now I actually miss the 4am wake up calls and I know the other kitty misses his playmate very much. So take a good look they might look vicious and sound like their killing each other but its possible they’re only playing. I hope everything works out.

Spring Crazy Cat by: Anonymous It’s a cats natural instinct to weed out the weak. Does your 11 year old show any signs of being sick? They are very good at hiding symptoms too, especially if there is another cat to prey on the weak. I would watch for any signs and maybe get the 11 year old checked out by a vet, just in case.