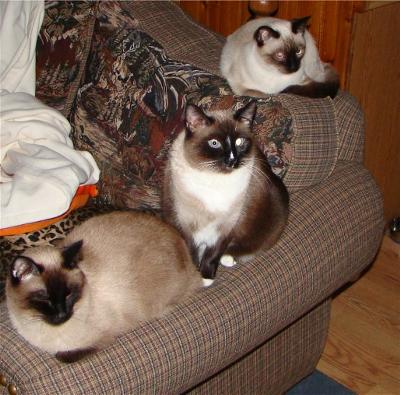 My siamese Rilee is so funny. He is not quite a year old. His latest game is attaching the paper towel role. He will just start batting at it and biting it, till it’s full of holes. It’s so funny I really don’t reprimand him for it. His favorite toy is Q-Tips which he gets from the wastebaskets. There are no wastebaskets safe in the house because he will knock them over and rummage through them till he finds the Q-Tip he likes. Then his game is batting it around the house and hiding it under a rug or pillow. My older male Moe likes to play with the plastic rings off from milk jugs. We have to play fetch with their home made toys. They both bring them back to us when we throw them. They are a lot of fun for my husband and I.

odd behavior in our siamese cat by: Anonymous I have a male Siamese that runs around after using the liter box. If he doesn’t run around he will stand in the hallway and make the scariest noises. I watched him one time and it looks like he sees something on the wall or ceiling and then runs away. It’s very funny, but I wonder why he does it. It seems that it is part of the breed. Does anyone know why? He also loves to eat paper, especially envelopes (including the glue part), coupons, cash register receipts, magazines, etc. But his favorite thing are photographs. He also finds socks and carries brings them to us.