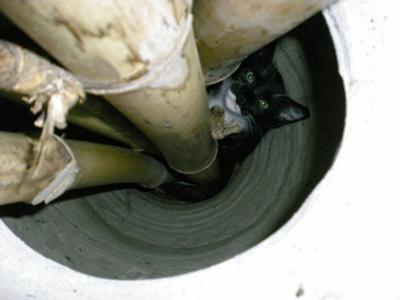 My insane cat in the vase

Night watch cat poo patrol, and other behaviors. I have a almost 1 year old cat named Seifer who has this thing with being what we call the 12:00 night watch.EVERY night at exactly 12:00am He will Pace through the house and stop at every door entry way and Meow in this flamboyant meow for 5 minutes. And then move on to the next door until he has “greeted” every door before finally sleeping. I have no idea why he does this. He is neutered and it is humorous and annoying to be woke up every night at 12:00am to hear his conversations with the doorways. Then he will go to his sleeping quarters inside a large ceramic vase.There is another “guard behavior” we call the “poo patrol” I have 2 other cats the odd thing is that whenever the other cats use the litter box, when that one’s done he will go in it and Re-cover whatever the other cat did. Then exit the box and poo right in front of the litter box on the mat. He also likes to take food out of his bowl one kibble at a time and chase it through the house, once that kibble bores him he will eat it. Then go back to the food bowl for another.Finally the last thing he does is opens EVERY cabinet door at night (we fixed that by double siding duct tape the doors shut). Is it just me or is my cat INSANE?

Midnight meows by: Chris Our Tizer (a 9 yo Persian) does a similar thing: Every night he has a looooooong ‘conversation’ with the front door before going to sleep.Can be very disruptive to one’s sleep but I love him and his brothers to bits.