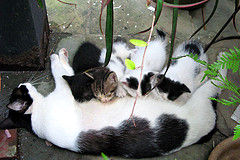 I have 3 cats, 1 is a black and white shorthair female of 21 amazing years of age she is patches. Then i also have optimus who is a grey, tan, black and white bengal along with mr pooh, his son, whos grey n white with long thick fur and a tail as thick as a feather duster hes gorgeous and so adorable n fluffy but he and his dad are having issues now that mr pooh is a mature 1 year old his dad is 4 but more playful I dont know why. It seems that mr pooh hasnt learned the difference between a male or female i would think that since they r father n son they would be cool n not try to mate but mr pooh gets persistent which causes him and his dad 2 fight i think its also a show of dominant male type of behavior they both however will go at it with patches if they get to her but shes fixed and old now so she ignores them usually. I will be gettin pictures up soon i just gotta figure out how and what i can do about mr pooh n optimus constant mating type of behavior cuz they r both boys and cant do that. I wonder do cats if theirs more than one establish a rank of a dominant male or female can any one tell me also how can I find out what breed patches is called shes got short hair a pot belly and is white with a black tail and ears and black patches all over her sides and back and her back legs n top of her head what breed is she called some one told me they come from china and are called chinese pandaras be cause they look like panda bear sorta is this true?Hi Curtis: Wow 21 year old cat that is amazing. You must be doing something right! I do beleave your 3 cats consider themselves a pack and are naturally finding their place in this organization.I have never heard of a chinese pandaras cat. But I am not a breed expert. Our cat is a male and sounds similar to yours. He is an American wire hair.Great story! We will post it and see what others have to sayThanks Mark & Cindi

Comments for my trio of kitties

my trio of kitties by: Bobby I have no idea what breed your cat is, but it sounds like a beutiful cat. I have two cats (neighborhood wild cats that we captured and rescued from the cold.) My black and white cat is abut 2 years old I think, the gray one we just recently captured and had him neutered. The older cat is a female. I hope you find out what breed your cat is.

Three cats by: Anonymous I did a search and could not find anything on a chinese pandaras. When you get time post a picture and we will try to give an identification. The Cat Breeders