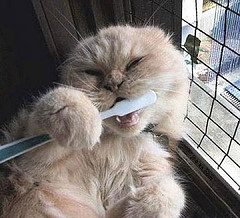 My little Ariel is just over a year old now and is quite quirky. She has a tooth brush interest that fascinates me. If she is near the bathroom when I go in she has to come in as well. Or she sits outside the door and pushes her paws underneath or occasionally will cry or make her little special noise she makes. So when she is in the bathroom she loves to pick through the garbage, for one thing- Cotton Swabs. She then proceeds to chew the ends with such passion and excitement that if you try to take them away she doesn’t get aggressive but she gets rather defensive. I don’t like her chewing dirty ones so I have stopped disposing of them in the bathroom garbage. However if I take one out and show it to her she knows exactly what it is and comes over to me with her mischievous eyes and takes it for a chewing spree. I find this odd and have never had another cat who does it nor does my other cat respond to them although he is much more passive than she is. Furthermore she used to jump up on the sink and go over to my tooth brush and rub her mouth all over it, thus it is now her toothbrush which she loves to play with but I need to instigate it much of the time. Unless as I figured out after she was passionately attached to my boyfriend’s t-shirt on the bathroom floor, she kept smelling it and rolling on it, I smelled it and TOOTHPASTE! I realized its the toothpaste she is in love with. When I put some back on her toothbrush and rinsed it (I didn’t want her to eat it) she was in love all over again. I don’t know why she does these things but I think if she were human she would be a dentist.

Comments for My Cat Thinks She Is a Dentist

Brushing teeth kitty by: Shadow’s mom That is the most adorable picture I’ve ever seen! I bet the person with the “stinky breath” cat would love your problem. Maybe you could get her into commercials for feline dental hygiene.

Glad my cat is not the only one by: Anonymous My cat, Lavender, does the same thing. She watches me brush my teeth with a lot of interest. Then, if I leave my toothbrush on the counter instead of putting it up in the cabinet, she’ll grab it and chew it. She’ll even hold it down on the counter and run her mouth across it like brushing! Too funny. The mint idea sounds like a good explanation.

cat who thinks she is a dentist by: Anonymous That is a very cute picture of your cat. I think the reason she loves the toothpaste so much is because cats in general are very fond of catnip, which is from the mint family. If your toothpaste is mint flavored, then it may be that it reminds her of that same smell.