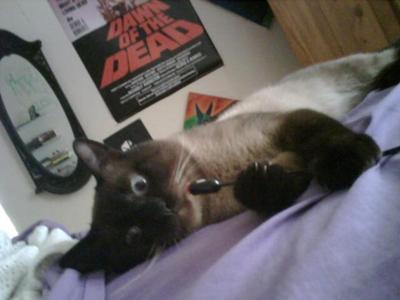 My 4 year old siamese cat, Okimoto, loves to pretend the carpet on the floor is lava, and if he steps on or in it, he will die. So, rather than walking in the “lava” he hops around on anything he can to avoid stepping on the carpets. I really wish I knew why he did this, because its not just normal curious kitty jumping around, it seriously looks like he has made some weird game out of it. If he is put on the ground, he will hop up all crazy-like, and run as fast as he can to the nearest chair or whatever is close. He’s a great, very funny cat, and has an insane and unique personality, but I really just wish I understood what could possibly make him do this. It’s not the only odd thing he does either.

Comments for My cat is a freak

scared cat by: Anonymous Well , we had a cat just like that, he was afraid of the carpet because of a lighting bolt hit near the house when he was sleeping on the rug, that really made him avoid the rug.

cat on hot carpet by: Anonymous my cat does exactly the same thing. He even puts himself in danger of falling, by hurling himself from one side of the staircase to the other to avoid touching the carpet. Some times he’s so anxious about touching the floor he will jump on to unstable surfaces and ends up in a pile on the ground. Apparently not all cats land on their feet when they fall! Or maybe that’s just another quirk of my cat’s mad personality!

toenails too long? by: Anonymous Check kitty’s toenails. They may be too long and are hooking in the carpet. To keep from getting stuck, he’s avoiding the carpet?

Freaky cat by: Carina Well, strangely enough, he does not care for catnip that much. And its not that I believe he is afraid of it, I do think that he is just a weirdo and likes to hop around pretending the floor is lava. 😛 No, but really, its not a problem for me, I just thought it was kind of strange for him to do. Also, I wondered if any other people have had cats to do similar things. He’s a great cat, really, and I hope he never changes!

You may never know why by: Anonymous It’s easier to address a problem if the reason is known but that’s not always possible. It will most likely take a great deal of patience and perseverance to change your cat’s behavior.If I were in your situation I would try to make the rug very attractive to my cat by placing irresistible things like catnip on there or his food dish just at the edge of the rug and over time move it further into the room. He may start to regard the rug as a good thing and not be so afraid of it. Gook luck!