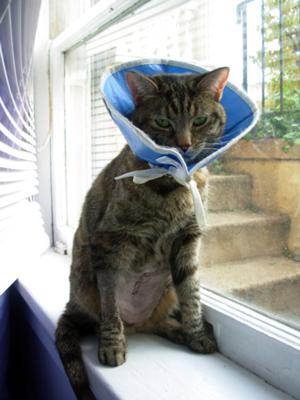 Mushroom is my 4 year old tabby tortoiseshell mix. The picture is from the incident we call “Shroom and the String” in which she swallowed an entire ball of yarn, requiring emergency surgery, 5 days in the kitty hospital and a couple thousand bucks out of my pocket. She’s my little darling but I have to admit she is really weird. She loves to be held and snuggled and doesn’t care at all what position she’s being held in (including completely upside down.) She loves when I put her inside bags of all sorts and swing her around in them. This has been going on since she was a kitten. She loves car rides and putting her toy mouse into her water bowl, swishing it around and proceeding to carry it around and play with it. I guess this makes it more lifelike. She has a designated sound for when she jumps up and jumps down and for just about every other occasion a cat has.Recently I pulled a knitted purse that has two large pom-poms on it out of the closet. It was left somewhere around the house and I started noticing that when I came home it had frequently been moved to a new area. Then I started hearing her cry loudly at night like I had never heard. She is a very vocal cat and talks back when I talk to her but never like this. Finally I started realizing that the purse would move around the same time that she made the weird crying noise. Just the other day I heard the noise coming towards my room so I sat still with a ridiculous feeling of excitement at catching her and waited. She came around the corner dragging the purse with the strap in her mouth and the bag on the floor between her legs so she had to do this hilarious waddle. When she caught me watching her she dropped it and walked towards me while pretending it never happened although we both knew it was a ruse. She obviously has developed some kind of obsession with her new accessory that is embarrassing to her. I think the purse is hideous, but one woman’s trash is another cat’s treasure.

Comments for Mushroom and Her Cat Purse

Cat Swallowed Drawstring by: Karen My cat plays with the mouse in the water bowl too! I thought that he did this to “drown” it because later he chewed it to death. Actually the water softened it enough to chew it apart. I also pulled a drawstring, the kind you find in the top of pajama bottoms, out of his behind. I brought him home when he was about 3 1/2 months old. The string was about 12″ long. I couldn’t believe it how we could have actually been able to swallow it without choking! I have noticed that when a cat gets something stuck on their tongue, they will try to swallow it.

Be very thankful! by: dixie doodle My brother’s Maine Coon was able to swallow 1/2 a spool of orange thread without anyone noticing what he was doing. I took him to the vet but it was too late to fix all the terrible problems. I’m so glad your kitty was able to come through the surgery. And since I don’t like to carry a purse I’m glad that she does! What a marvelous story and what a sweetheart Ms. Mushroom is!