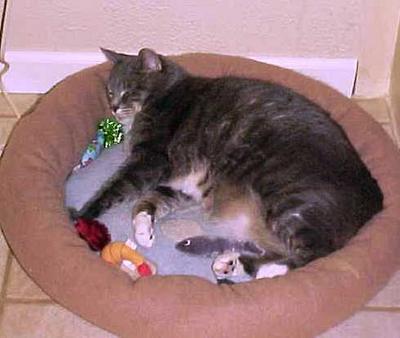 My cat is kneading into a trance like frenzy. I adopted an adult neutered male Maine Coon cat from the pound about three months ago. Last month he attacked my leg while I was talking on the telephone. I thought at first that he was play-stalking, but I’ve noticed that whenever I’m on the phone, he kneads repeatedly until he’s in a feline trance. And then when he’s in this trance like state the frenzy sets in and next he attacks. It’s happened several times. Is he attacking out of anxiety? How can I stop this weird cat behavior?Voted best response by the cat community. Jules has this to say about a cat that kneads into a trance like state of being. I’ve had cats all of my life and I do not know what to make of this kneading business that my current two cats will do from time to time. A few months back my 5 year old Himalayan spayed female started kneading compulsively before she would lay down to sleep. She would walk around on the bed in little circles kneading with all four paws for 15 min to a half-hour. She has since stopped doing this for the most part, although she does still knead a little (only for a minute or two) before lying down. Then, last week, all-of-a-sudden, my 2 year old neutered male Himalayan started kneading compulsively too! I have been woken up in the middle of the night almost every single night since then with him kneading my legs or sitting on top of my back and kneading me. He also purrs extremely loudly when he does this. He will knead compulsively for 30 minutes or so until he finally settles down. Last night though, I was lying in bed reading a magazine when he came up and started kneading my legs again. Like I mentioned with my other cat, he will knead with all four paws so it is like he is balancing on my calf which is a really strange thing to watch. After he did this for 20 minutes or so he flipped around and started licking himself. Well we now call him Rocket Man, if you know what I mean. So, what I am now questioning, is if he is even really “kneading” me, or if he is attempting to mate with my leg. Obviously, this is really creeping me out. I cannot be waking up in the middle of the night to find my cat humping my back. If that is what he is doing after all? Does anyone have any ideas? My cats have never done this until recently and now suddenly, it has become an obsession.

Comments for Kneading into a trance

weird kitty trance by: Anonymous I have a neutered 8 year old main coon and he just started doing this too, and its happening almost on a daily basis. I’ll be sitting on the couch with him right next to me as always, I could be talking on the phone, watching TV, reading, whatever… Out of nowhere, he’ll start to purr and kick me with his back legs for a little bit and then lock into my arm or hand with his teeth and he doesn’t let go, it’s like he is in a weird out of control trance. I’ll remove him from the situation and he just snaps out of it. Anybody know what this is all about?-Austin

Affection by: Emma Kneading is a sign of comfort and affection, if a cat kneads you it means he loves you! Cats also have scent glands on their paws so they are also claiming you as their own when they knead you. Nobody yet (that I have seen) has mentioned why your cat likely does this whilst you are on the phone. I read somewhere that the reason cats often behave oddly whilst their owner is on the phone is because they cannot see the person you are talking to, and therefore assume you are talking to them! It’s most likely that your cat thinks you are talking to him and therefore responds by showing that he loves you back. Not all cats knead with their claws out, but some do, which explains the pain! He is not attacking you at all.

Kneading into a trance by: Anonymous My 6 year old cat has recently started doing the exact same thing, almost as though he is trying to mate with my leg, locks on with his teeth and kneads with all fours whilst balancing on my thigh. When I try to stop him he wails and eventually he gets off and starts licking himself. He is clearly aroused and (he’s neutered). Happens almost every time I sit down. Used to think it was my dressing gown he likes but now does it whatever I’m wearing! Very odd. Think he is just showing affection.

One of mine does something like that by: DKGeneralLee I have 15+ year old Maine Coon who does a similar thing. When he is kneading, or being pet, he really gets into it. After a little while he’ll start biting whatever is near by, in the case of petting, it’s my hand. He never really bites too hard, and it’s not an aggressive bite, but it’s like he just can’t control it.

kneading and trancing by: libra By kneading, do you mean the behavior is like kneading dough? I have a baby black cat who followed my son home a few weeks ago. He is not neutered currently. Last week, he started what seemed like kneading the blanket on my bed, whether I am under the covers or not. He also looks like he is either licking or rubbing his nose against the cover. Last night, I noticed that his shoulder bones are much more pronounced. Is it from this behavior? He does eat and should not have shoulder blades sticking out. Please Help! I cannot afford a vet right now and don’t know what to do.

instinctive cat behavior by: Anonymous I have had many foster kittens born at my house. They always “knead” as they are nursing, which I presume helps milk production. This behavior often carries on into adult cats. They tend to knead people or other pets which they have developed a close bond with. Your cat loves you!I’m not sure what you mean by your cat attacking you. I have a cat that I bottle fed from the first day he was born until he was 8 weeks old. I am his mommy. When he’s in a really cuddly mood and also in a sort of trance he bites my ears and nose some kind of instinctive cat behavior. Even though he does it gently it still hurts because his teeth are so sharp. He loves me.