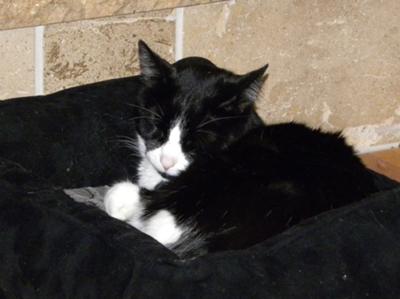 I love this cat

I love this cat he followed my car for a half mile and taps on the fire place when he wants in. I have never had cats just dogs. A long story short I had a little mice problem and could not stand the traps so my husband said we need to get a mouser. I thought he would hate me and I him, but I got a cat off of craigs list. After 4 years he is the love of my life. Also I never knew until I talked to a friend what cat behavior is like. The strangest thing that happened was that I was driving down the road and stopped at a light and some guy taps on my window and says is this your cat. He said it was the damdest thing he had ever seen but he was following my car.He also taps on the fireplace when he is cold and the same thing with the covers. He is an indoor cat but in the spring he gardens with me and comes running To his name (for me anyway). My husband took him to stay with his mom for the weekend. I will not leave him alone but he got away from him in downtown Minneapolis. He calls me and said he was sorry. We could put up flyers and he had looked for him for an hour, and held me and said he was sorry but he did not think we would be able to find him (no collar) because it had come off in my husbands hand when he tried to grab him. I love this cat so I drove there from saint paul and am waking around saying, baby keeks where are you. After 30 minutes of me searching I hear meuwwwwwww, and there he is locked behind a gate I can not get to. So I had to hope he stayed. I ran all the way back to a condos lock door (it was a gated community) and buzzes security to ask him to let me in. He had to come all the way to the door I was at. Then we ran to the locked gated, keke was gone but the man opened the gate for me where I saw him. I called and called him then he jumped in my arms. One more thing, over 4 years has brought me 26 mice. He does not kill them, just comes up to the bedroom and yells that maaaawwwwww. I turn on the light and follow him down stairs and I let them go again in another yard, so least they have a shot. But Christmas time he did the maaawwww thing twice in one evening and he had a Green fake from his stocking, he does not play with toys usually at all. I guess just A gift. Sorry about the typing I am on a nook. I love this cat – Rhonda

Comments for I love this cat

cat roof story continued by: rhonda So I get back in bed and he starts his maaewwing again….and with my back to him proceeds to dig in my hair like it is a cat box…….I asked him if he was nuts and because I still do not take care of whatever he wants me to…….he starts biting me and pulling me to my regular part of the bed. I said is this all you want and moved over. than he just sat on my neck and purred. and I swear on all that Is holy…….15 minutes later….my husbands entire half of the ceiling crashes down to the bed…….a pipe broke and the ceiling insulation was full of gallons of water. major remodel and it would have fell on me…….go figure – Rhonda

the roof story by: rhonda I Sorry I almost forgot. I work out of the house and was doing a drawing for a client in bed…..I honestly was just being lazy that day…….I had moved over to my husbands side of the bed because there is more light…..he sat there with me than left after I wouldn’t let him help by chewing the colored pencils…….so I would put him on the floor. He’d be gone for a few minutes and then come back…….after about the fourth time doing this he started with the maaewwing…..I looked he had no mouse….I looked to see if he was hurt……I told him he had already been feed and told him he has just gotten a new clean litter box………but he kept at it. …we did not have the dog at the time so he was the only indoor animal……so I got out of bed to make sure the door to the cat box was open it was. I looked around the house and didn’t see any problems and he was then quiet…….than go back up to my drawing again……..and he starts in again….so I must rolled on my side to keep him out of the drawing…..so all of a sudden he starts maawing again. …I tried to ignore him so he starts digging in my hair with both paws and when I swat him to stop he politely bites me.

More about Keke by: Rhonda Ke ke is amazing his biggest problem is sexual identity issues…lol…..we name all our animals after historical/mythological figures…our german shepard pup is Medusa….and keke original name was Vlad ( like Vlad Dracula)….but I have a hard time saying “kitty kitty” …don’t ask me why so when we first got him I called him KEKE Vlad….that is his official name…the vet said “What” we laughed….the vet is lucky he doesn’t have to deal with our pond turtles. titus pulo, etc…..I call the my cat baby keeks when he is lost or I cannot find him…everyone that sees him thinks he a chick…so to correct that…he humps everysoft thing in the house.It is a big spectacle…I through out tons of covers before the doc told me he was just showing off….he was fized but fixed late…..so there is nothing happening that to his horror I am sure….but than he will bite me…..doc called a love bite…I think he is just up set that every one calls him a girl….he only humps natural colors no pinks, purples or plaids…and maaeeewwws his head of. He is rather small an lean for a 4 year old cat…but I think a beauty…..he his also extremely smart……I work as a artist with the computer a lot and if I do not pay him enough attention he will politely walk over my art work or the key board and when you think is a gone past…he will stick out his hind leg and hit some of the keyboard keys….totally messing me up….”like oh dear how did that happen…..his favorite food is chicken nuggets…….I tell him you want some nuggies……he will sit at the door or come with me until I have them….he his not the type of cat the rubs on you he head butts you…..so you put the mcdonald bag on the counter and all the maaewwing starts …he is head butting the bag, me…I cannot be a drink on the table because it will head but it until it falls over…..they have to be cut with a scizzors and put on a white plate not his bowl and then he goes sing all over the house. He is truly a nut that I love with all my heart……I think bringing me the fake mouses at christmas was the funniest…….our new situation is getting the shepard to not hurt ke ke ..he justs wants to play…..but she is 80 lbs and just now a year old…she has grabbed keke before….I am scared to death she will hurt him…thanks for listening……everybody should have a pet…Rhonda

How Could You Not Love that Cat! by: Anonymous Your cat sounds so amazing!! I am so glad you found him again!!

Good cat story! by: Mark Hi Rhonda: Thanks for taking the time to post this story about keke. I like the fact that you hired the kitty to do a job and now your best friends. I think if more people would give cats a chance like you, that there would be a lot less felines in shelters. P.S. Me and Cindi would love to hear the story about how Keke knew the roof was caving in!