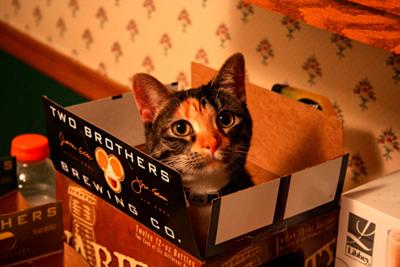 I have had my female tortie about 2 years now. she is an overall good cat. It took her a while to get out of the “kitten” biting stage, but I’m pretty sure that’s under control now. She is very sweet to me, greets me at the door when I get home and lays down at my feet until I pick her up and say hello to her.Here is my issue, if I have company over she will be standoff-ish and slow to approach them. she will eventually approach them, rub against them, and walk across their lap. But when a guest reaches out to pet her she flips out, ears back, hissing, swatting, and aggressive biting attempts. Now if the guest extend just their hand out for her to smell, she is fine, it only happens when they try to pet her.When I bring her over to my parents or sisters house, both of which have male cats, which she is typically fine around. An occasional hiss or growl at the beginning is all, then both cats leave each other alone. My sister also has 2 small dogs, which want nothing to do with my cat. the problem here is that one a person tries to pat her, including myself she flips out and has the same behavior as above with a constant meowing and growling, and a frequent hiss at absolutely nothing. I think maybe she is stressed out since she is in a new surrounding. How am I supposed to get her accustomed to my parents ans sister house so they can watch her when I am out of town? My family has said that they are afraid of her, and at time I am too. Please HELP! any suggestions would be greatly appreciated. It has crossed my mind to put her up for adoption when she is behaving like this, but then I remember how sweet she is when its just her and me at home.Thanks you,Eric

UPdate on Kali by: Eric J Well my trip was this past weekend. Kali was at my Mom’s house with her cat Caz. Caz is an older male cat, and about twice the size of Kali. When I dropped off Kali on Wednesday last week my Mom and I discussed the best way to handle Kali’s fussiness. I purchased a small bottle of Comfort Zone to use at Moms to help Kali be less stressed. We also decided that no one should approach Kali, but to just basically ignore her until she was ready to approach them. After 2 days at my Mom’s, Kali stopped her random hissing. The next day she was laying on my Mom’s feet. From then on Kali allowed my Mom to pet her and give her some lovin. When I went to pick her up on Tuesday, Kali cam down to see who came home, saw me, then just continued about her business. Normally she would meow and rub against me until I picked her up and said hello. I am taking her actions as that she was comfortable and that she liked the bigger house vs. my 1 bedroom condo.I appreciate everyones opinions and I’ll have to see how she does the next time I bring Kali to my Mom’s. Hopefully she will recognize it and the people there and fall right back in where she left off.She has been extra cuddly since we got home the other day, it makes me realize how much I actually did miss her.

How would you like to have a total stranger come up and pet you? by: Anonymous Speaking as a long time cat owner, I believe that cats are usually very loving and wonderful pets. However, that said, I also believe that they must be treated with respect. In fact, they require it. Please try to think of Kali, as a member of your family who has her own unique needs and personality. Respect her differences and preferences and you will be rewarded with a wonderful companion.Some people may incorrectly assume that pets exist strictly for their amusement and entertainment, and don’t give the animal space to be themselves. When you have guests over, let them know right away that the cat is somewhat fussy and doesn’t like to be petted by strangers… until she has accepted the person. The cat will eventually come around when she feels safe and unthreatened. The guest may be a friend of yours, but Kali doesn’t know him or her from the man on the moon. She has to get comfortable around other people before she allows them to touch, pet or pick her up. Her hissing reaction is simply a defense mechanism against perceived aggressive behavior towards her. I’m certain Kali is not a mean cat; she just needs “A Little Respect”.As for taking your cat to another house, that’s another story. Cats don’t like change and, unlike dogs, they usually don’t do well outside their normal environment. Perhaps your family members can visit you and Kali on her turf without other animals around. However, the same rules of respect apply. Once she gets to know and accept them, she will no longer feel intimidated. Leaving Kali in another home with other animals will be challenging. Animals are territorial by nature. The other cats and dog may not readily accept her. It is unlikely that Kali will be happy in that situation. If you plan to be away from home for a period of time, the ideal situation is that you make arrangements to have a trusted person come to your home to feed the cat and provide some company in your absence.Remember, our pets are not toys for us to play with until we tire of them. All pet owners experience occasional inconveniences. However, any committed pet owner will tell you that they would never give up their pet just because they are a bother.The best advice I can give you is to remember the two operative words… RESPECT and COMMITMENT.May you and Kali enjoy a long and happy life together.

Well, … by: Tiffany Hello Eric!Sounds like you have a problem very similar to one that my husband & I have with one of our 4-leggers.Her name is Lil Bit, & she is also a little, well shall I say, different. We got her when she was 4 weeks old. To her, I AM Mommy. She also views my husband as Daddy. However, other than that, she doesn’t always play very well with others. Lil Bit will tolerate the one 4-legger that we had before we got her, but other people & other 4-leggers are an entirely different story.I’ve often joked that I think Lil Bit has kitty autism. She does not do well with any sort of change, and that applies to people as well. IF she can go at her own pace, according to her own comfort level, she seems to do better, but I can’t say that she ever really gets relaxed when things are out of the ordinary.And, there are times when nothing is different, and yet she still freaks out. During those times, I do one of two things:#1 – I pick her up & love on her & attempt to calm her down.#2 – I leave her alone & let her deal with it in her own way.Without knowing your cat, I can’t really tell you which option to choose at what time. For us, it’s been a learn-as-you-go-along type thing. I can tell you that it takes a lot of patience & tolerance to care for a 4-legger with these types of issues.As for your family members, friends and even you, at times, being afraid of certain behaviors from Kali, again, it’s a complicated issue. With Lil Bit, I found that, most of the time, all the growling and hissing was more for show than actual threat. She tends to operate under the impression that if she sounds and looks mean, she doesn’t actually have to BE mean. Because I have had her a while now, I know when I can reach in & pick her up & when I can’t. However, I wouldn’t recommend this, unless you are very sure of the animal’s behaviors & reactions. Otherwise, show them respect, & give them a lot of space to handle things on their own.If you are committed to Kali & want to keep her, you CAN get through this and have a wonderful, rewarding relationship with her. However, if you are doubtful in any way, then finding her a more accommodating home might be the answer.Either way, best wishes, & good luck to you!