My cat will not stop licking me. My cat is driving me crazy. she licks constantly! She’s not grooming, she’s licking me, my husband, our clothes. Any time she’s near us or when we pet her, she licks. She also grooms a great deal. She was neglected for her 1st 2 years and her only entertainment was to clean herself. But I can’t go near her without her licking! She loves to sit on my lap at night, but she just licks my arms and my pants. I can’t stand her on me because she’s always doing it. It’s a sloppy wet kiss, not a grooming type lick. I don’t want to reject her. It took a year for her to even respond to me, much less want to sit on me, but this licking is driving me crazy! Is there anything I can do? 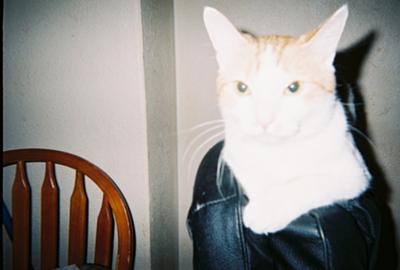 Insane cat behavior and habits of my cat. Our cat Junior is completely insane and has some irritating habits! His first habit is chewing on plastic bags. Every chance he gets he does this. I wish he would stop. I don’t know what to do to get him to stop. His second irritating habit is that when I go into the bath room to .. well.. you know.. I shut the door because he goes in there and tears up the toilet paper or will watch me take a bath or other things. When I shut the door, he throws a conniption fit. He doesn’t just meow, he yowls. And he also scratches on the door. His other habits are that he chases bugs and eats them. I try to discourage him about that but it never works. And his worst habit of all is he can not have his food on the floor in bowls. He has to have the bowls of his water and food in a huge turkey pan. Other wise he will make a huge mess. Even though he has them in the turkey pan he still does it. He will dump over the bowls, dump the water and will stand in the turkey pan and put his paws in the water. He still makes a mess but it’s in the turkey pan. That habit drives me and my partner absolutely insane. I want to know if any one knows how to discourage that behavior.

The cat nursing herself story. I have a cat who is one years old and she will suck herself or nurse herself on a regular basis. We can only guess it was because she was taken from her mom at a very young age and was not ready to leave. But it has been a year if not more and she is still doing it. Now here is the weird part. Its not the suckling so much that’s weird but how the suckling is triggered. She will only do it on my bed first of all no where else and when she has been petted on the head. Nothing else will start her nursing herself unless she is in those two situations. Its kinda funny when she is sucking herself because nothing can break the spell when she is kneading her tummy and sucking her side. You can pick her up and move her to a different spot without her even knowing it. Its quite amusing.

My cats aggressive behavior towards husband. We have a 6 year old fixed male cat that is normally very affectionate towards my husband. Once or twice a week he will drop his ears back, start hissing, and go ballistic and into an attack mode towards him. We don’t know if he smells something from outdoors on his pants or if it is an alpha male thing or what but Duncan the cat gets really aggressive and it is down right scary. He does not do this to women. Any advice would be appreciated.