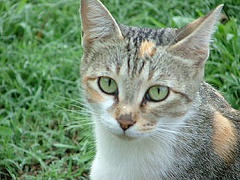 I had a cat named Turbo, a calico, white, gray and rust. I had her for 10 years. All my cats are indoor cats, but I allow them outside and keep an eye on them, depending on where I live. This home was an old farmhouse with a large barn and the barn was rented to a local farmer. Well, I let Turbo out on a nice fall day and she didn’t come back at dinner time. She didn’t come back the next day either. I searched all around my property, the barn, the roads. I called the shelters and the vets. I put an ad in the paper. She never came back. Of course, we were heartbroken.2 1/2 years later, in the middle of winter, I went to a store to get some wrap to keep rodents from eating up my shrubs which happens when there is a lot of snow. There was a donation can from a local humane society. There were photos of cats. None of them was Turbo, though. BUT, I had a feeling I had never felt before. I had the overwhelming need to get to the humane society as fast as I could. Mind you, my 10 year old cat had been gone for 2 1/2 years. I got to the shelter and asked to see all the cats. They showed me through a couple of rooms and lots of cages. She wasn’t there. They said they did have a cat that they thought was about 6 yrs old and she had been there about 2 months. I went into the little room and was shocked to see my Turbo, looking pretty good, in the cage. I almost couldn’t believe it myself and the shelter workers sure didn’t. I told them I would go home to get a picture to prove it. She had a tell-tale little beard and then my husband reminded me her one fang was broken at the tip. I went back with the evidence and they gave me my missing kitty, 2 1/2 years older, but glad to be home.

Comments for ESP from my cat

ESP from my cat. by: Adele We had a similar happening with our cat “TOM”. We had him from kitten hood and he was an indoor cat who was allowed to go outside to play and hunt in our rural location. When he was three years old, he didn’t come in for his supper. We called him for bedtime and he still didn’t come.After searching around the roadway and outbuildings, and calling him for the next few days, we came to the conclusion that he must have been taken by the coyotes.Fourteen months later, about 11 pm, we heard a sound at the door, and there was Tom! The strange thing about it all, was that it was the middle of November, and there he stood,dry, spotless, and no winter coat! He was so glad to see us and – although normally he was a quiet cat – he talked non-stop for hours, trying to tell us what had happened to him! He went around bunting his cat brother and sister in between quick looks around to make sure everything was where it should be.We never found out where he was all that time, and how he got back home without showing any signs of having traveled.