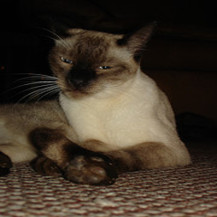 I had a chronic constipated 15 yr old Seal Point Siamese male. “Silly” is my Siamese cat. He was brought into an existing cat family of 3 but in reality one of the 3 cats I had was a crazy cat, a female kitten we called “Lil Gurl”. I found her in my garage and bottle fed her. We had a rescued female lab then too and she got along well with her. The Lab eventually died though.1 year after lab’s death a somewhat young orange and white domestic tabby male cat found me. I brought him (Koob we named him) into our home to join our extended family. “Silly” became miserable with the addition to our pride maybe even a little threatened bt another male. Especially when he felt signs that Lil Gurl was in heat. The short story on this is Lil Gurl had been spayed but the vet failed to remove all of the ovaries. I resolved the ovary issue and found a kind and patient veterinarian that found and removed it. But after that Silly became fearful, full time of my other cats. He only would allow me to touch him. He seemed to be ousted by my other cat(s) and at age 15 became severely constipated. A Life threatening major problem. I had no money after all I had spent already on Lil Gurl, that being around $800.00 for the last visit. After paying close attention I found silly the Siamese was unable to move his bowels at all. He was Constipated or blocked completely.I called a veterinarian pharmaceutical corp and they are the ones that saved my cats life. This company told me how to administer an enema to my cat, the vets would not provide these instructions. Her life was saved by this information. After 1 week of rectum enemas as well as oral caster oil he had a bowel movement on his own. Not only did he walk again but lived another 5 yrs.