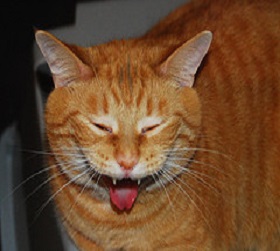 We want our Chester cat back. Chester is a two and half year old male orange and white tabby. We purchased him from the humane society and they estimated he was about eight months old. We keep him indoors all the time. A couple of times he’s gotten out and if we are right there he minds very well when told to go back inside. More on his intelligence in a moment. However, on two occasions he wasn’t noticed and eventually he wandered off behind our house which has a small river with overgrown brush and trees here in Hawaii. On both occasions he came back early the next morning, no problem. But on this occasion (two days ago) he returned the next morning and as I approached him calling his name with love. He looked at me and hissed and then ran away. An hour later he came back, but then ran back toward the bushes and river area. This is totally out of character and although every cat owner thinks his cat is very special, and rightly so, Chester is a very smart cat. I know, you all have smart cats, however, will your cat, on command, sit, sit-up, lie down, fetch, ride a skateboard and most importantly, go potty in the toilet. It was done with a lot of patience, love and too much time on my hands. A friend of mine suggested that maybe he ate something or was stung by something (scorpion or centipede)and perhaps it’s creating an imbalance in his brain.At sunrise tomorrow I am going into the bush to look for him. The area is blocks long and wide, so does anyone have any suggestions on what could be causing Chester’s strange behavior? For any non-believers of Chester’s abilities, Videos of his performances are available upon request. Just give me your email address. LOL. Mahala and Aloha from the island of Oahu.Bobby

Great news about chester by: Anonymous I was so happy to immediately see your update about Chester’s belated return. Although I never experienced the behavior ascribed to Chester, I know the anxiety of a missing indoor cat companion. One of mine went missing for two nights, in hungry coyote hills, no less, before appearing at our door, covered in fine construction dust.

HE IS BACK by: Bobby At 2am this morning just as I hit the send button on my article, Chester walked into the house very wet (it had just rained) dirty and hungry. Talk about giant goose bumps, wow. Actually at the exact same time I hit send, I could then hear him eating his dry food. I really had been thinking the worst. He won’t be getting out again. Thank you people for the support and come to Hawaii and spend money. Lol. Bobby Eisler