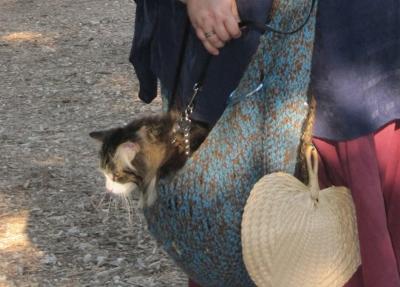 I have an indoor cat who loves to go on walks with me. We use a leash like a dog, and he has learned to be very good about keeping up with me and going around obstacles to prevent the line from tangling. But once he decides the walk is over, no matter where we are, he just flops down and won’t move. I have to carry him all the way home. So I got the brilliant idea of putting him in a bag. I first tucked him into my jacket with just his head peeking out, but he grew too large for that. Then we used a canvas grocery bag, but he hated not being able to see where we were going. So I crocheted him a bag just his size, with sides only a few inches high. It goes over my shoulder and he sits just below my hip. He loves riding in it! I take him to the park, outdoor festivals, even the local renaissance fair. It’s like having his own portable safe haven. If he gets overwhelmed by the activity around us, he just burrows into the bag and snuggles or naps. But the rest of the time he is happy to ride around with his head out and observe the world.

Cat wants to be alone

Cat wants to be alone. I have a four-year old orange tabby (Sparkle Tangerine) who will stand up on her hind legs and push the door closed with her front legs! There is no real reason why. Sometimes she just wants to be alone!

Something About Murray Kitty

by Julie (Birmingham, AL, US) 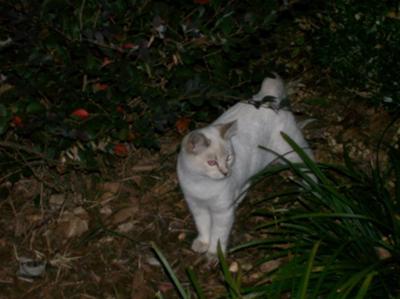 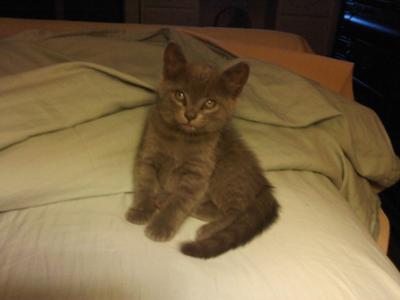 I have two cats, Kitty (4 yrs) and Murray (less than 1 yr). I named her “Kitty” because that’s all I ever called her because I couldn’t think of a good name for her, and never did. But at least it’s easy to remember. She loves to lick my face constantly and roll over on her back for me to scratch her belly, and purrs while she gets a bath. Murray is strange, he has an obsession with watching the toilet flush, every time he hears it flush he has to come watch it. Often when I come home I find him in the kitchen sink, just chillin in there. And if there’s any plastic bags laying around, like when I’m unloading groceries. He has to lay on them and keep me from picking them up and throwing them away. But I guess the strangest of all is that he rubs my face with the end of his tail for a long time, even if I move my face away. But all in all, he’s a cute little turd.

We have 3 rescued kittens with a sick habit. Not sure what to do about it. Late october we rescued a litter of kittens that had been dropped off in the country to die. Out of 4 I was able to keep 3 alive. They where 3 weeks old when found. They are healthy and have been to the vet. Please forgive the next sentence. It is gross, but true. My white female kitten is always sucking on the other kittens anus. We separate them when we see this, the other kittens sometimes try to stop her, and other times just don’t care. I thought she did this due to not nursing from her mom, but now she is much older and still doing it. If you have any insight or help it would be great.

Will the Moaning ever stop? Momma Kitty is an 12 year old domestic short hair that is the queen of our house. She was spayed 10 yrs ago after her litter of kittens. The past 2 yrs or so she has been moaning in the middle of the night and she wakes everyone up! I’ve heard her act that way when she was in heat, but it’s been years! Its only when the lights get turned out for the night does she start her obnoxious moaning. She is healthy, always has good food and water, she gets treats, and we all play with her. She has free access to the balcony since she likes to go outside. I also have a Chihuahua, but she plays with her. Does anyone know what could be causing this weird behavior?

Leo cat has a baby 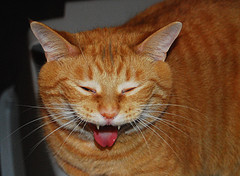 When Leo was only a few months old, we had 2 beanie babies he liked to “fetch” and play with. Recently he has taken to putting the red one in his feeding dish (which is not empty). And yesterday I found the pink one in his litter box. Needless to say the pink one went out with the litter. Anybody have any thoughts on why Leo does this?