My cat kimiko is a calico cat and is mostly indoor besides for some walks. And when she is out on our balcony, but my family has noticed something strange that our cat does every time it rains. After its done raining we will let her out on to the balcony and any twigs and sticks that are laying around outside she will pick up in her mouth bring them inside and make a little pile just inside the door. Thats all she really does with them, also as a side note she also picks up the paper balls we give her to play with and puts them in my shoes.

My Cat is Terrified

My Cat is Terrified of my boyfriend but not anyone else. My one year old baby cat, Kisses, goes into a panic whenever my boyfriend comes to see me in my house. She cries and flies behind the smallest space she can, under the tv stand or hiding on a shelf, crying and peeing and pooping in fright. He’s never done anything to her, ever, as he was only introduced to her about two weeks ago. I’ve tried coaxing her to come out, tempting her with treats, getting him to hold and pet her, getting her to stay in the same room as him, getting him to stay still and sit quietly, getting him to talk to her in a high voice like I do, getting him to feed her, I’ve tried letting her sleep with us (she usually sleeps either with my mam or with me).She nearly died as a kitten due to a hare lip and she’s like our baby as we had to feed her with kitten milk, which is why she has a close bond with my mother. When my boyfriend is not in the house she’s fine. He’s a big man, 6 foot 5 with a deep voice but I’ve had friends over who are similar and there have not been any problems. Please help as my boyfriend feels terrible and I don’t want my little cat to be scared or upset or cry anymore. I’ve had to take to keeping her in one room at night just with water, food and newspaper on the ground. She was completely toilet trained until recently. I don’t know if this is because of her missing my mam, who she considers to be her own mother, just not liking my boyfriend or both. Please help. 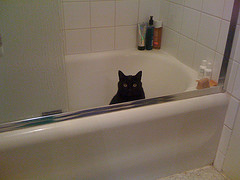 My cat pees and poops in my shower. Never did this before. I have a 14 year old orange tabby named Fido and he recently started pooping and peeing in my shower! It’s very aggravating to say the least and he never did this before. I don’t know why he thinks he can do this and why he randomly started doing it. I still have his litter box in the other room and I keep it clean and show the litter box to him repeatedly but he still continues to use the shower. Does anyone know how I can stop him from doing this and why he does this?Cat-Health-Behavior.com sponsored ad

My cat, Caspian started to look around at the nightstand. When we first opened the drawer he started digging like there was no tomorrow. Then he came out with a bunch of ear plugs and chewed on them. Genevieve: Our cat Thomas loves Q-tips! Only the used ones. He digs them out of the trash in the bathroom and plays with them for hours. Maybe it has something to do with earwax?Mark & Cindi

Video short circuited my cat! This morning I played a video in which a kitty was making a very distressful, horrid meowing. Within one meow both of our cats were up the stairs and by the 2nd horrid meow they completely freaked out. The big one attacked my arm, which was unfortunately near the computer (frantically trying to stop the video). When he quit attacking me he immediately went after our younger cat, knocking down lamps, tables and going crazy.I managed to lock them in separate parts of the house and decided, after a few hours, they could come together again. Big mistake.The little one started fighting, too and when I got him into the basement and slammed the door, the big one attacked me again. After I got him off my leg (which was pouring blood) he had me “cornered” and was in a crouch, ears back, hissing and growling. I got a squirt bottle and backed him off. Within a minute or two I was able to lock him in a room.After a visit to urgent care for my shredded limbs and some antibiotics and sedatives and some mild sedative spray for the cats, things might be getting better. We’re thinking of letting them see each other again this evening. They both seem a little calmer now (it’s been 4-5 hours).I sincerely hope this didn’t cause any serious harm to the boys. They’ve lived together in great harmony for five years and I’m distressed to think a minute of some stupid online video might have destroyed their togetherness. Probably not, but very sad.The point of this is to be very careful what you expose your kitties to. It NEVER would have occurred to me that something like this could have happened. Has anybody else ever experienced anything like it?