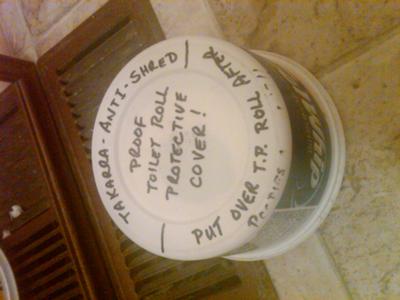 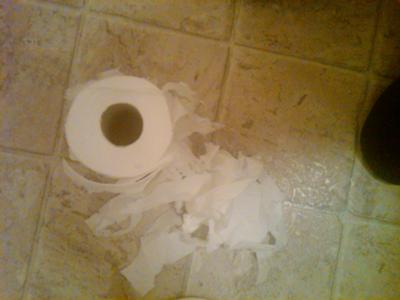 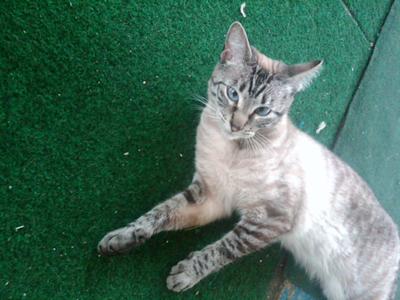 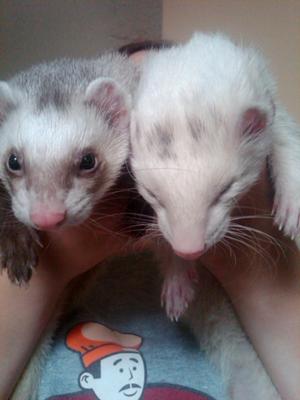 these are her buddies (bo & jose)

My Cat attacks the toilet paper and paper towels. My cats name is Takarra she is a 2 year old blue eyed tabby point domestic house cat. She started attacking the toilet paper about 3 months ago. We covered it with a container but now she has figured out how to get into the container. Now I have to keep it locked up in the cupboard. No other cats I ever owned did this. Anybody have any ideas. She has 2 ferrets she loves to play with too.

Cat opening doors all over the house. Okay here is what my cat Baby does. She also hates to have any door closed in the entire house. she wants every door open. I leave the bedroom door cracked open. She can go in and out at night but she slides her paw between the door and the wall and pushes it wide open. I mean all the way open like I did it. She has the strength of a person almost but she is 15 years old and maybe 8 to 10 pounds. Oh and if the door is closed she will meow and meow and when you open the door then hit you with her paw and meow at you some more. 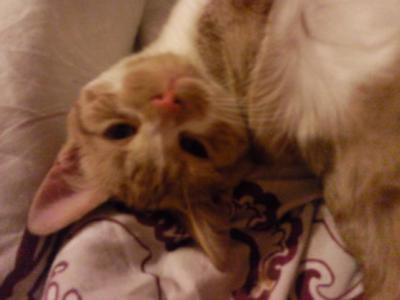 Oh Juicy why? why your milk? I have a male kitten 7 months old called juicy. I litter trained him when young and eventually taught him to do his mess in a dirt patch at the back of my garden. I have been very pleased with him and never found any accidents on the floor. However today he was crying at me to go out so I opened the door for him but it was raining so he bolted straight back in. I had a little moan at him because I knew he would only be moaning at me again every two minutes to go out until he got brave enough to make a run for his dirt patch. Has I was having a moan i heard a trickling sound I turned, looked at him and he was stooped over his water bowl and was peeing into his milk. I was so shocked. He was just stooped there for what seemed like the longest wee ever looking up at me. But why? Why his drinks bowl? has he got mental health issues? has he been doing it without me knowing before?

by Mandy Moo and sister too (Texas)

So, I was home alone in my new apartment, (first tenant ever in this apartment), watching a movie. My cat went in the middle of the room and started staring at the ceiling and walking in circles and meowing as if there was someone standing there. It really freaked me out, so I called my sister to tell her about it and trying to get her to come over. While I was on the phone, the cat then laid in the floor as if he was ready to pounce with his tail moving erratically. He has never acted this way before and really scared me. Is this normal behavior? 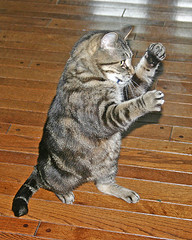 My cat has wrestling moves. I got my cat about a year and a half ago from the shelter. He was just 8 weeks old. Ever since we brought him home he has an alpha male attitude towards my female cat who is 3 years older than him. He will chase her away from us, or chase her when she is playing with something that he feels he has claim to. Sometimes he seems to want to play with her, sometime it seems like bullying, either way, she’s not amused. Although it can be annoying, it is something that we (including my other cat) have gotten used to. However, right before he “attacks” something, whether it be my other cat, toys, or even my hand, he will turn away from it, back into it, and put his right back paw on it. Then he will do a flip type move and attack his target. It’s very funny to see him in action, I’ve never seen another cat do that before. We joke that it is his signature move. I was just wondering if anyone has a cat does the same thing? If anyone has any ideas what this is about I would love to hear them.

My cat has jumped over the thresholds of both the front & back doors since he was young. He acts scared about going over it then finally jumps like he’s avoiding touching it. Recently he has started doing this at the threshold of the door leading into my garage and now won’t walk on the 3 stairs right outside the door, rather he climbs on sacks or anything beside them & then hops over the threshold to get into the house. Does anyone know what could be going on? Thanks.