Our cat is obsessing over a stuffed animal. My cat has a little purple teddy bear that he has had since he was a kitten. The bear has been around for about a total of 5 years. My mom accidentally washed him and all hell broke loose. My cat has now picked up the weirdest habit. He stands two feet on top of the bear and kneads his claws into it and he meows at a very high pitch while doing it. Then he grabs Teddy bear by the neck and meows with it in his mouth. The weirder part is he only does this at night, and when nobody is looking. Usually if you walk in the room he stops. When he does this his back is very arched. I worry about my weird kitty so I looked up communicating with him. I read that high pitched meows express anger or pain and that an arched back means they are curious. I think he doesn’t understand why his friend suddenly lost all his stink (lol). We are going to leave the Teddy in each family members bed when we sleep to rub off our smell, so maybe he will stop being such a freak and like the thing again.

Cat sharing her toys. My cat is truly wonderful. She is a black cat with yellow eyes and a small white spot on her chest. I lost my previous cat to kidney disease and was not ready for a new cat for two years. The thought occurred to me that when an ad was in the paper that a beloved cat needed a new home it was time for me to get a new cat. Then one day the thought came into my mind that the ad was in the paper now. And it was, a neighbor who I did not know had to find a new home for her cat because her children developed a cat allergy. She had been a great addition to our home, with no problem behaviors despite being left alone occasionally when we are on vacation. Usually she stores her favorite toys by her food bowl. But on occasion she will bring one to me on my bed or in a different room. I like to think she is sharing her toys with me. Cindi’s response: It’s funny how the cat sharing toys thing can go both ways. We have one cat that will share her toys with not only us but her little brother as well. On the other side of the coin our boy cat refuses to share his toys with anybody and will go out of his way to hide them in special areas that even he can not get access to latter. By the way your cat Zoe is beautiful and thanks for submitting the story and picture.

Kenya, is our 8 years old Abyssinian male cat. He is a very affectionate, and healthy cat who loves to play around. Sometimes he plays as if he is on a serious mission. Note that he also has weird tastes in toys. His favorites are string beans, twigs, any small pieces of paper, and leaves. Given the chance to find these things, he will carefully gather one, or different items in his mouth and facing us, or his sister (our other female Abby) will start some sort of strange ritual dance.Arching his back, mouthful of “toys”, eyes wide open, tail down, he starts rubbing his two hind legs together while turning slowly in order to face his “audience’. He also gives us a semi-growling soft sound ( some sort of muffled chattering). All the while keeping his jaws tightly closed on his “prey” as if to show off his trophy’s. We don’t know really what to make of his behavior. It can last up to 10 minutes and can end as quickly as it started. We have noticed this little dance for a few years now and are curious if anybody else ever seen their cat do the same thing.Response From Cindi: Thanks Linda for your story submission. It reminds me of a dog and pony show. Our Tuxedo cat Thomas has a “Cat Dance Ritual” of his own. We call it the dog and pony show. He does it for about an hour before dinner time. The dance goes like this: He shakes his tail while standing on his tippy toes ( rear paws only ). He then makes one circle to the left followed by one circle to the right. This ritual cat dance lasts until the meal is served. Anybody else have dancing cats? If so leave a comment describing what the routine looks like. and when they do it.

You gotta love this cat. Okay so my cat is about 2 years old now, he wondered in one day and decided this was his home. So we kept him after nobody claimed him. Anyways, just recently he has begun to whack me over the head with his paw in the middle of the night. I guess in a claim for my attention, he has also begun biting the light switch that is on the wall beside my bed and above the night table. He sleeps on top of the car in the daytime, and he also likes to climb up peoples legs and hold on and go for a little ride. I should also mention he has a yowling problem. He doesn’t stop meowing, OH AND he likes to roll over at the base of the closet and MEOW.. really loud. He likes to play dead too. He is a cat that is sure to be one in a million. You just can not love him.Response from Cindi: Hi Medina, great you gotta love this cat story! We all think it is fantastic that you welcomed the kitty into your home. Sometimes cats seem to know well in advance where they will be welcomed and loved. I wanted to share a quick related story about our 12 year old female cat Riley who also showed up one day and claimed this place to be her home. She has recently developed a yowling problem of her own. She is very large, 25 pounds and has a very impressive volume. The neighbors who often say “You gotta love this cat” sarcastically can hear her through the solid concrete block walls. The problem with her yowling is she does it for attention. The more attention we give her the louder she yowls. If we ignore her (which is hard to do) she will only howl for a few minutes. Just thought I would share and thanks for your submission. – Cindi

About the screaming ragamuffin cat. My adorable lil man Fonzie is a grey haired ragamuffin and indoor kitty. He’s very playful and affectionate to me although not really so much to other people living with us. He is shy of some of my house guests and hides when people come to visit. But this isn’t what I’m here to tell you about. Fonzie started screaming one evening, it sounded like he was being squished. So I ran downstairs to investigate. I was shocked to high heaven when he lunged at me screaming and chased me back up the stairs. I saw a orange tabby sitting on the veranda sitting pretty. Fonzie was freaking out because of that cat.My sister says that he had picked that up from me. Seeing as we had a homeless man wander into our backyard for a few years on a daily basis. And I would freak out and yell at him from an open window to go away! Fonzie goes nuts when this cat comes around. Only this cat dares to go on the porch. Our two outdoor cats are not very good at defending their turf. I can’t possibly be there every time that cat comes onto the porch to spray it with water. (to discourage it from coming up on the porch) oh I have been attacked by Fonzie when I got to close to him when he was freaking out about the orange cat… my leg got clawed up.This is the cat that LOVES me and usually follows me everywhere. Sleeps with me and gives me kisses! Any tips on how to deal with this. 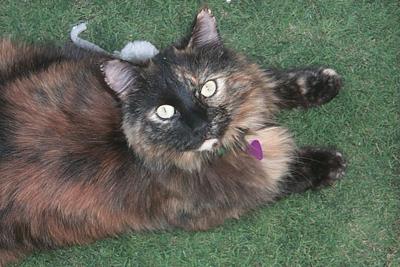 My cat hunting legos. So my 10 year old female cat who is of course fixed was meowing with this really deep concerning meow and wandering around a bit. She then came into the living room where my husband and I were watching some late night TV and she had a hot wheel in her mouth. She set the hot wheel down on the floor and meowed a couple more times. We thought WTH? Well, she did it again a couple of nights later. But this time, she did the meowing, and then brought a lego piece into my room by the door. And apparently she did that even more during the night because I got up and there was yet another lego piece right outside of my door. My son also was awoken by her meowing in his room, and sure enough there were a couple of legos in their room on the floor. What the heck is that about?