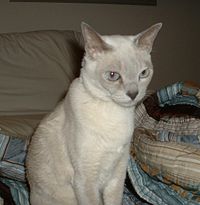 Why toy mice in the food bowls? I have a Tonkinese cat and a Siamese cat. Each morning we find the toy mice placed in each of the two dry food bowls. My Siamese cat collects all her mouse toys (4) and places them in her food bowl and in the Tonkinese cats (who she adores) food bowl placed in a different location in the kitchen. This she does every night. Once in a while there would be no mouse in the Tonkinese cats food bowl. After they had an argument, we realized that she did this when she was mad at him, because there was no mouse placed in his bowl for three consecutive days.She will also fetch her toy mouse and carry it back in her mouth.

Cat thinks I can not hunt

Trouble in a cat suit

My six year black cat thinks she must hunt for me. She has a collection of about 10-12 assorted small stuffed animals, a fake racoon tail, and balled up gloves and socks. She goes into my daughter’s room and retrieves them from the stuffed animal basket in her closet, raids laundry hampers or and picks up what ever she comes across that fits the bill.She has one pair of my daughter’s soft gloves that she has been bringing to me repeatedly for several months. She never chews them, just carries them around from room to room, floor to floor. She will bring them to me as I watch TV or use computer. They go from upstairs to downstairs in various combination’s daily. She makes a chirpy sound as she approaches to let me know she is bringing me another gift. She also brings me bugs, birds and small animals (live or dead). Last summer she brought in three birds with in 1/2 an hour, I rescued the same chipmunk 3 separate times. During the course of the summer there must have been at least 30 moths and grasshoppers. (I appreciate the sentiment..but YEOW!)

Chews Off Tales and Nurses

I have a calico cat who also chews the tails off her toy mouse toys! She does it so quickly that I have actually never seen her do it. She also has a stranger quirk. She seem to “nurse” on satin pj’s. She kneads and licks, making sucking sounds and nuzzles, and purrs and purrs and purrs. I thought it was strange when she was a kitten. but now that she is the ripe old age of 13 I do not know what to make of it! You would think a cat this old would have forgotten about kitten stuff like nursing? 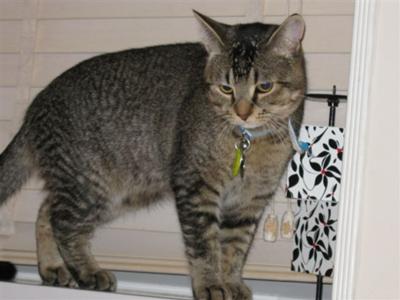 Our cat Morrison was born with congenital defects, affecting his lungs, he has allergic bronchitis or “asthma” and is actually allergic to beef, chicken and salmon, as well as having a skin allergy to pot plants! He also has a heart murmur. But is a lovely character and generally happy.Well we brought him little rope mice last Christmas which had cat nip inside them, and guess what?! He ate one of the mice whole! Resulting in a life threatening bowel obstruction and had to be operated on!So we’ve now taken away his toys! And anything else that he could eat but shouldn’t! The point being, that if your cats have toys don’t let them run off with them and play with them unsupervised! We’re just lucky we got him to the vets in time! 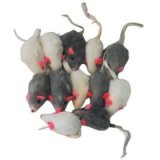 My cat Finn ate a small furry mouse toy which is covered in rabbit fur. I am not sure when he did this but after a night of vomiting and a morning of not eating I took him to the vet for x-rays. And $1100 later he has an incision that runs the length of his stomach and he can only eat a tbsp of food every couple of hours and cannot use normal clay litter because of the risk of infection.

Mice in the Toliet 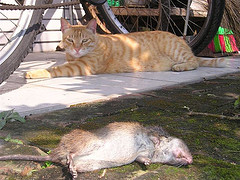 In spite of our best efforts to tighten all cracks, we do get mice in our old farmhouse. Fortunately we have a cat who enjoys catching them. The trouble is, after he’s tired of chasing and playing with it, he deposits the half-dead mouse in the toilet! We’ve not seen him show any interest in the toilet at any other time.The cat and mouse game!

Our cat is building a nest 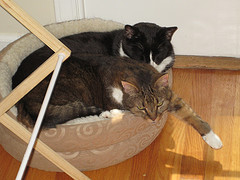 Our cat is building a nest I think? Azalea is a girl cat, but she has been fixed. We have had her since summer, where we picked her out at the animal pound. She was not a lovey-dovey cat, but very frisky and curious also very independent. She has become much more loving and interested in us over the months. She goes outside for about 5 minutes at a time, but is an indoor cat. Recently she began scratching the grass in the front yard in one spot. She has created a small grass mound. At first, I thought she was building a nest. Since she is fixed, this had me wondering. But now, after seeing her in action, I think she is covering something up… but there is nothing there to cover up. Any idea what this cat behavior is about?