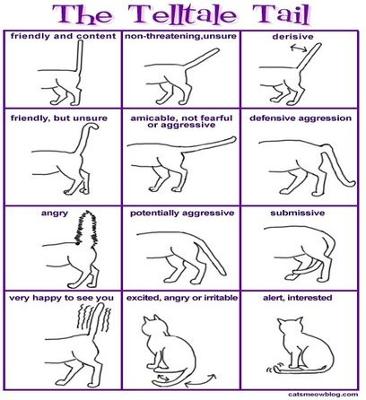 Cat puffed up tail, pacing and growling. My cat is very sweet! She is always purring, and coming up to you. Today she came into the house with her tail puffed up. She was pacing around the house and growling non-stop for at least half and hour. I looked all around the yard to see if there were any animals who snuck in, and I couldn’t find any. When a cat does sneak into our yard she will hiss and meow, but once shes back in the house she is normal again. She stayed very low to the ground. My first thought was that maybe an earthquake was coming and she was sensing it. I do live in a very earthquake prone area. But it has been about 5 hours now, and still no earthquake. I held her and petted her but she would not calm down! When she stopped growling, and un-puffed her tail she started acting a little more normal, but she is still walking very low to the ground. Is an earthquake coming? Can she sense an earthquake this long in advanced?

Comments for Cat puffed up tail

Angry? No way by: Anonymous My cat puffs it tail when we are playing! I think it is the cutest thing.

Puffed tails by: Anonymous The image should say that a puffed up tail can also mean fear. It means fear more often than it means anger, as angry cats do not always puff their tails.

A guess and strange exception by: DJRazorGirl My guess is that your feline was spooked by something outside really badly and is now just wary. Strangely enough though the icon at the top of your story doesn’t fit my little Shadow. She is the first cat I’ve known with 2 types of puffy tail. Her angry/spooked tail is the normal rounded puff we’re used to seeing. But sometimes when she’s really really happy, Shadow’s hair along her back meets to a Mohawk like point and her tail puffs outward instead of round. I’ve never seen a cat do this and still find it funny.

tail story by: Anonymous i found this really informative! my cat walks around with her tail up all the time, but occasionally she goes crazy and runs around the house with a super puffed up tail… i don’t know why she would be angry though. i thought it was her being hyped up.

Did the puffy tail actually predict an earthquake? by: Mary Lou I liked your puffed up tail story. I also learned a lot from the various tail images and their interpretations.I recently introduced a third female cat into my family of two (male & female). Well I have seen a lot of puffy tails lately… the puffiest one belonging to my female, Sophie. She has serious problems with the newcomer, Sasha. Funny thing is that Sophie is a short-hair Siamese mix & the most remarkable thing about her tail is that it is ring-tailed, but small in diameter. However, when it puffs up… it is huge!

shaking the tail! by: Anonymous loved your cat puffed up tail post. It explains a lot with my cat billy. I always thought that he was imitating scenting every-time he saw us as he shakes his tail. But now I know he is excited to have us home!