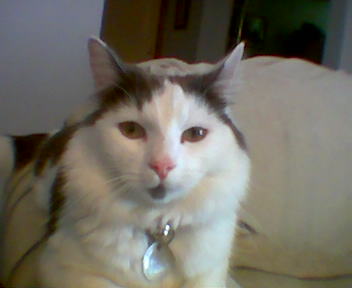 My beautiful charcoal and white semi long hair male named Oskar loves to be patted. After a few strokes, he bites me between my thumb and index finger, or the base of my wrist. He then straddles my arm and dances over my forearm with his hind legs. He keeps hold of my wrist/ base of my thumb with his teeth and holds on until I release his grip. I have to lift him off or else he will continue for a long time. Sometimes if I am laying down, he will straddle my lower leg and do much the same thing. VERY STRANGE! I have had many pet cats over the years but have never had any of them behave like this. Do any other cat owners have pets who do similar things?Regards KIT EE

cat does this by: Anonymous I have an older rescue cat, I want to say he is maybe 12 years old. For a few weeks he has been straddling our legs and needing on both sides, he was mainly doing it to my husband but last night he did it to my leg and I woke up because he started humping. Why do that do that?

My amorous kitty does this too! by: Anonymous I have an Abyssinian mix who does this with my blankets! When I asked the vet why he did it (despite being neutered) he said it’s a dominance thing.

My cat did the same thing! by: Anonymous My male 1 yr old kitty use to do that too, but he would become more aggressive and didn’t like it when I stopped him. It got so bad sometimes that I would have to put him out of the room. As soon as I had him neutered it stopped. That behavior is the same behavior dogs have as well (it’s just that dogs to that to your legs mainly).

Amorous kitty hmm by: Anonymous My cat does this constantly. I think its kinda normal, they want to be pet, but once you do, they don’t want it. 😐

Strange but True by: Lola Hi KIT EE, That is so funny! My cat Thomas does the same thing. When we’re getting ready for bed , he comes in and starts kneading the blanket. He really seems to go into a zone. So I let him be for a minute then just nudge him to snap him out of it.If I do that he won’t take it to the next level. He just curls up and goes to sleep! I think he just starts out being happy while he’s kneading and then just goes somewhere else in his little head. It’s good to know that Thomas isn’t the only strange kitty out there.Thanks from Lola