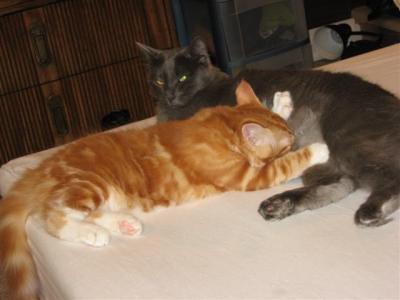 I introduced a new male kitten to my two adult cats (one male & one female) about eight months ago. He was 8 weeks old at the time and has a nice even temperament. As soon as they all adjusted to each other the kitten started sucking on the males teets. This happens mostly when the adult male cat is lying on his side on the floor or he’s on the kitchen table.I thought for sure he would grow out of it but he still does the whole suckling or nursing routine and the adult male just lays there purring away. I find it so strange that he never once tried to do it to the female cat. The kitten and the female cat seem to tolerate each-other well but they give themselves lots of space. Whereas the adult male cat and the kitten are best buds and do lots of things together. They just have a special bond with each other I guess! Does any body have any ideas to bring the adult female cat into the fold or improve her relationship with the other two. And has anybody seen this male cat nursing on male cat thing before? My instinct is to try to put a stop to it even though both cats like it. Maybe I’m over reacting?

Male kittens sucking on each others nipples by: Anonymous Our cat had 5 kittens and we’ve ended up keeping 2 of the male kittens. They are now 5 months old and one of the kittens sucks on the others nipples. I don’t think it’s a result of them being weaned too soon as the mother cat has been with them the entire time. It is really strange though.

Male adult cats suckling by: Anonymous My cat had 5 kittens 3 male and 1 female. We actually ended up keeping them all. Mom cat nursed them all for a good 8 weeks. She was a very good mom. Anyway the male cats grew up and continues to suck on each others belly’s. Glad to hear it being I guess normal. I worried for health reasons I mean it can’t be good for their tummy’s as they suck pretty hard. I don’t know what to think of it.

chapped nips by: Anonymous I have an adult (2-3 yr old) cat named Mr. Toast, I also have renters & one of them bought a tiny, feral kitten home! The kitten started nursing on my adult male cat, I noticed because he had chapped nipples. LOL

Nursing Male Cats by: Anonymous Another nursing male cat, now we know we are not crazy. This is so funny, we also had a kitten nursing away on a big feral male cat we had trapped and neutered. Because we found out that the wise old one (Duncan) had all but one tooth left, we let him take over the house. Pomegranate, the kitten, was adopted by the Mr. Duncan and was watched over by this big (20+ pound) male. Duncan would keep track of and call for Pom whenever they were separated. Pomegranate’s mother was wound a little too tight and was going in for the kill when grooming Pom, so we separated them for his safety (she had killed his litter mate). So, he ended up with a Dad-Mom. No worse for the wear, Pom now rules the roost and Duncan lives on in our hearts as the tough guy with a [heart of gold].

“Nursing” kittens by: Anonymous I had introduced two young kittens to an adult male and the same happened with us after the introductions were complete. The two young ones would belly up to the adults ‘teets’ and begin to ‘nurse’. Purring, kneeding and all. This is a common response to kittens that have been taken from their mother a bit too soon. While not uncommon, I’d never actually heard of another incidence. Too funny.