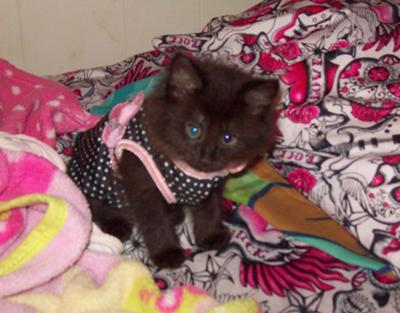 Our Cat Tom Moved on But Enriched Another Life. We had a male cat when I was little named Tom. We also had his mother whom was fixed & they seemed to get along. A very sweet kitten but liked being an outdoor cat. He was always sleeping in the cathouse we built for him & hanging around our yard in general. Then around Thanksgiving one year (1987) he had been gone for several days. We got a call the day after the holiday from a couple stating they had him at their house. The surprise came when they told us where they lived- about 5 miles away. They were surprised too when they read his tag what our address was. He had gotten friendly with their female cat and enjoyed playing with her. We drove over to get him, met them, and fought Tom to get him in the car. They became frequent callers to our home to let us know that Tom was back. After about 6 months or so we decided since they didn’t mind and there was nothing we could do, we all decided to “share” him. Finally, sometime in 1988 or so we hadn’t heard from them or seen Tom in about a month. We figured he’d stayed there and just let him go. In 1996 we were detoured onto the road that our cat had moved to so many years before. To our surprise, as we passed the colonial the couple lived in, we saw a cat that looked just like Tom. We had to stop and knock on the couple’s door to inquire. Sure enough, it WAS him, but he had moved next door to them. Turns out, their neighbor became a widow the year before and Tom cat would follow him around keeping him company. Before long, the man put a cat door onto his screened-in porch. The man wasn’t home when we discovered this, but we left our number. He called us later on & told us how thankful he was that he had Tom in his life now that he was alone. Who would’ve thought 8 yrs later the sadness we felt over losing our cat would turn into another man’s happiness? Cats are incredible! I am 34 & have 4 of my own now.Jennifer: Thanks for taking the time to post this story about Tom the cat. It was one of those stories that makes us so happy to host the site. I’m sorry I had to change the Title it would not fit as it becomes a file name. As a cat owner who has a cat named Tom myself the story has extra weight. We call him Thomas usually. Also thought your story had perfect timing as we just put up our Christmas tree tonight and our Tom cat loves it, so the whole family was in the right frame of mind to enjoy your story!