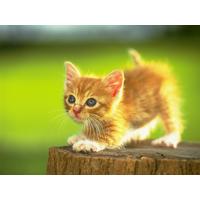 A few years ago we had a cat named Tigger. For some reason Tigger thought that he could feed off my mom. He would knead her chest and purr, sometimes sucking at her skin. He’d do this at all times of the day, day or night. When he was younger he’d crawl into her bra and sleep, but then he got to big to do so. He grew up to be a real big boy. He was 20lbs of all cat-no fat! He was as smart as he was big in size. Tigger also taught himself how to turn door knobs, that weren’t locked, to go outside. He’d jump up, cup the knob between his paws, and turn it all by himself! He would sit and watch us do stuff with such intensity that you knew he was trying to learn how to do the same things you did. He thought he could do anything if he could just figure out what the trick was. I know there are smart cats out there but tigger was the smartest we had ever seen live and in person.

Comments for A Cat Named Tigger

My cat used to do that too! by: Anonymous When my kitten was 7 weeks old, she had started to knead and suck at my hand. I would just pick her up and place her by her water dispenser and she’d have a drink.

open the door by: sharon I’m still waiting for my Mabelle to evolve so that she too can open the door

Incredible! by: Margo Your first story with the kneading is very common but cute…however, the fact that Tigger jumps up and cups the doorknob, opening the door is incredible! What a feat! Guess you have to be careful he doesn’t leave doors open all over 😉

A Cat Named Tigger by: Anonymous You have an intellegent cat

TIGGER by: Anonymous Sucking is common with kittens that are taken away from the mother too early. They are looking for the same comfort that human infants get while nursing. Doesn’t have anything to do with being thirsty.

My cat named tiger by: Kimberly My cat also named tiger does a variation of this as in he tries to milk my belly button. Even though he has never got any milk from it he is not giving up. Now if he could learn to open the door like your cat maybe he could run down to the 7-11 and get some milk!